Is there anything more comforting than a creamy potato soup that is topped with chives and bacon crumbles?!

This Paleo Whole30 Potato Soup recipe is the epitome of comfort food. It’s creamy, yet it has lots of potato chunks. It’s flavorful thanks to the bone broth, garlic, onion, and nutmeg.

AND it has an extra oomph of flavor from cooking the onion and garlic in bacon grease.

Note: this Whole30 potato soup recipe was originally published in October 2017. The post and photos were updated and republished in September 2020.

Kind of tastes like mashed potatoes but in soup-like form? Check ✓✓✓

Satisfies both my soup and potato cravings? Check ✓✓✓✓

Made with good-for-you ingredients ✓✓✓✓✓

A note about the coconut cream. Make sure to use a coconut cream without any preservatives inside. Preferably one that you really like the taste of because this will season your soup. My all time favorite is Savoy coconut cream.

It honestly depends on the ingredients!

If you are using non-processed real food ingredients, like in this paleo potato soup recipe, then yes!

Since this recipe is Whole30 compliant and Paleo, it is made without dairy, without gluten or grains, and without any processed sugars or flours.

It is also made with bone broth, which is great for the gut.

In my opinion, a potato soup can be healthy if all the ingredients are high quality real food ingredients.

How to make this dairy-free potato soup:

To start, you cook your chopped up bacon in a soup pan until crispy. Put the bacon aside.

Leave behind the bacon grease because this will help flavor your soup!

Next, cook the onion and garlic. Add the cubed potatoes and cook for a few minutes.

Then, add the crispy bacon pieces back into the soup, along with some bone broth. Cover and cook until the potato is fork tender.

While the potato is cooking, make your creamy coconut cream/almond milk sauce. Start by heating some olive oil, and mixing in your coconut flour and tapioca flour. Then, add almond milk, coconut cream, and nutmeg.

Mix the sauce until it thickens.

Then, once the potatoes are fork tender, remove from heat and mix in the creamy coconut cream/almond milk sauce.

Put 1/2 of the contents from the soup pan into a blender and pour into the remaining chunks of potato.

NOTE: if you want your soup to be very smooth and have less chunks of potato, then add more of the contents in the soup pan.

If you want your soup to be extra chunky, then add less.

I was inspired by this Absolutely Ultimate Potato Soup recipe, and I adapted the recipe to my tastes and my Paleo and Whole30 preferences.

I have made this Paleo Whole30 Potato Soup so many times that I have lost count! I hope you enjoy it as much as my family and I do!

How to serve this paleo potato soup:

My personal favorite for this Whole30 potato soup is extra crispy bacon and chives. 🙂 And sometimes some vegan cheddar cheese!

Other Paleo and Whole30 soup recipes you may enjoy: 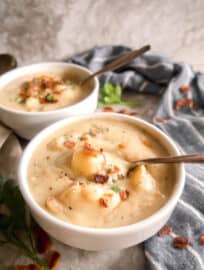