I’ve been all about Spring and Summer recipes lately. Salads, fruit, and basically anything refreshing has been on my radar. And then spring allergies happened. Texas pollen allergies.

Which is where this Paleo Chicken Soup a.k.a “Chicken Soup for the Caveman’s Soul” comes into play.

During certain times of the year, I find Texas to be particularly brutal when it comes to allergies.

Right now my car has a yellow tinge to it from all the pollen!

Luckily, I escaped last week with lots of sneezing, a runny nose, and a slight sore throat.

But my fiancé was not so lucky.

He ended up with a sinus infection and a horrible sore throat.

And on top of that he’s been having a bit of a flare.

If you haven’t read my “about me”, the long story short is that my fiancé has an auto-immune disease, which we have found is best controlled through eating Paleo.

When he’s fine, it’s ok for us to veer off course every once in a while.

But when he’s having a flare, processed foods and dairy are really hard for his body to digest. He gets rashes and fevers, and feels weak. It’s just not worth it.

Since his throat hurt so badly, he wanted soft foods… and he asked for chicken soup.

Something that I have never made before… WELP.

I couldn’t just heat up some water and throw a pack of Lipton’s Chicken Soup into it, especially during a flare.

So, I decided to try to make a Paleo Chicken Soup.

Now normally, I find homemade chicken soup to be rather boring… which is why I put so many spices in here! And the spices really did the trick, at least for me.

Using chicken stock AND adding rosemary, crushed red pepper, oregano, and thyme to the chicken resulted in such a rich, flavorful soup!

I’m so happy with how this Paleo Chicken Soup turned out, that it is definitely going to be my go-to chicken soup recipe!

I began by cooking the onion, garlic, and fennel.

Then I added bite sized chicken and lots of spices and let everything cook together, to create lots of flavor.

I then added chicken stock, sweet potatoes, carrots and cauliflower to the pot and let it all marinate together.

I originally made my soup with 1/4 tsp of crushed red pepper, which resulted in a hot kick of flavor.

Which I thought was great.

And which my fiancé liked too because he said this opened up his senses and it felt good for him to be able to taste something.

However, I reduced it to 1/8  tsp for the recipe, because I think that’s a better base for chicken soup.

You can always add more if you are feeling adventurous. 🙂 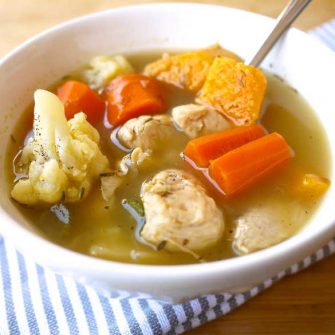