This Gluten-Free Quiche Lorraine with a Potato Crust is on point! I took a classic french quiche Lorraine recipe and lightened it up a bit by using almond milk instead of heavy cream and using sliced potatoes instead of a traditional butter crust.

This potato crust quiche is basically an entire breakfast / brunch in pie form. And it is glorious.

I say that this potato crust quiche Lorraine is an entire breakfast because it’s got potatoes, eggs, and bacon inside. Which sounds like a complete breakfast to me!

Although, I’m a huge fan of quiche for lunch as well, especially when it’s paired with a side salad.

Note: you can use regular milk or any non-dairy milk of your choice

How to make this Potato Crust Quiche Lorraine:

Slice you potatoes and then line them up in a pie dish in a circular pattern. Try to cover as much of the pie dish as you can with sliced potatoes.

Spray or brush with some olive oil and then bake the potatoes for 20 minutes.

Step 2: make the inside of the quiche Lorraine

While the potatoes are cooking, start cooking the bacon in a pan to get it nice and crispy. Then remove the bacon from the pan and cook the onions and shallots in the remaining bacon grease.

Then in a large bowl, add the eggs, almond milk, and spices and whisk them together. Then add the bacon and onions and mix them into the egg mixture.

Lastly fold in some gruyere.

How to serve this french quiche Lorraine with a potato crust:

You can serve this gluten-free quiche Lorraine in so many ways!

I vary how I serve this quiche based on if I am eating it for breakfast or dinner.

Other healthy breakfast recipes you may enjoy:

This amazing Gluten-free Quiche from Allergy Free Alaska looks dreamy. It is dairy-free too!

This Vegetable Frittata from Meaningful Eats is full of spinach, eggs and potatoes! It looks so good!

This Paleo Gluten-free Spinach Bacon Quiche is a gluten-free, grain-free and dairy-free quiche recipe made with a paleo flakey crust and a fresh spinach and crispy bacon filling. 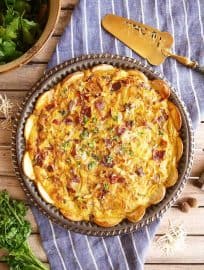 9 Comments on “Gluten-Free Quiche Lorraine with a Potato Crust”