This healthy pumpkin banana bread is AMAZING. It has a subtle hint of pumpkin, is laced with swirls of pumpkin pie spiced cinnamon coconut sugar, and is topped in a delicious maple glaze.

This recipe reminds me of Fall because it is FILLED with pumpkin pie spice.

Note: this post was originally published in 2020 and was updated in September, 2022.

If you love cinnamon, pumpkin spice and pumpkin baked goods, then you will love this almond flour based pumpkin banana bread. It is amazing with a cup of coffee or with some tea.

(Oh and you should definitely try my Pumpkin Olive Oil cake as well! It can be made with regular cream cheese or dairy-free cream cheese and it is SO good.)

This pumpkin banana bread is one of those recipes that is great to whip up before guests come over because then your house smells amazing. And then you have a delicious baked good ready and waiting for your guests.

Note: Make sure to use a coconut cream brand that you like the taste of. I’m very picky with mine because I don’t like when it tastes like sunscreen. Savoy is my favorite brand.

How to make it:

To make this recipe, you need to make the pumpkin banana bread batter, the cinnamon swirl, and the maple glaze separately.

Before making the batter, you’ll have to mash your bananas. Try using a potato masher to mash them. It makes things so much easier and you can mash them at any angle.

Then, you’ll mix the wet ingredients together in one bowl and the dry ones in another and then combine them.

To make the cinnamon swirl, all you have to do is mix some coconut sugar, cinnamon and pumpkin pie spice together.

Pour half of the pumpkin banana bread batter into a loaf tin and thin sprinkle 3/4th of the cinnamon swirl on top of it.

Then, pour the rest of the batter on top and the remaining cinnamon swirl on top of that.

Make sure to pat down the layer of cinnamon swirl that is on the top of the banana bread so that it bakes into it.

While you are letting the banana bread cool, make the maple glaze.

Mix some coconut cream, maple syrup and vanilla together with a fork.

Then drizzle it on top of your cooled off pumpkin banana bread.

Is this Pumpkin Banana Bread Paleo?

Yes! All of the ingredients in this recipe make it naturally Paleo, Gluten-free, Grain-free, and Dairy-free.

Does using almond flour in this pumpkin banana bread make it gluten-free?

Yes. Since there is nothing with wheat, barley, rye or oats in this recipe, it is gluten-free.

How do you store it?

Store it covered at room temperature for up to 4 days.

How do you make your own pumpkin pie spice?

Mix together ground cinnamon, ground ginger, ground all spice, ground cloves, and ground nutmeg. You can play around with the amounts that you like, but I usually have double the cinnamon and nutmeg amounts to the rest of the spices.

How do you serve this gluten-free banana pumpkin bread?

By itself, topped with almond butter, topped with melted chocolate, with tea or coffee. The list goes on and on.

Other healthy banana breads you may enjoy:

This Sunflower Seed Butter and Chocolate Chip Banana Bread is a favorite of mine. Sunflower seed butter and chocolate were meant to be together. It’s a treat in banana bread form!

I love this Paleo Carrot Cake Banana Bread (GF)! It has all the great flavor of carrot cake but mixed with banana bread. SO yum!

This Healthy Moist Banana Bread by Gimme Delicious is made without sugar or butter!

This Gluten-free Pumpkin Banana Bread from Thyme and Joy is a moist and slightly sweet pumpkin banana bread that has the perfect texture! Yum! 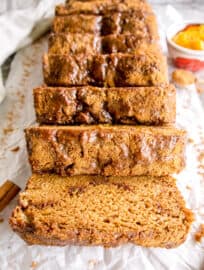 published on September 12, 2022 by Dominique