This Paleo Ground Turkey Taco Zoodles recipe has been my most recent dinner obsession. It started while I was doing the Whole30 in January, and I have been unable to stop eating it ever since.

I make this recipe at least once a week! And my husband and I literally lick the pan clean…. yup the pan… not our individual plates. Try it and you’ll see what I mean. 🙂

I blame the magic ground turkey taco meat. It’s the most delicious taco seasoned ground turkey that I’ve ever made! And it all came to be on accident.

I mentioned the story in my Paleo 7 Layer Ground Turkey Taco Dip recipe. BUUUT, basically I was tired of cooking one night. I cooked everything I ate during the Whole30… and was not feeling it that night.

So, I threw some ground turkey onto a pan. Literally threw it on. Haha

Note: make sure to use ground turkey that has a little extra fat in it. I used 94% ground turkey for this recipe. The grocery store was actually out of the 99% one that I normally buy… so it was fate!

The extra fat makes a difference in the texture and taste of this magic ground turkey taco meat.

Then I added tomato paste and hot sauce to the ground turkey and mixed. All while the heat was on.

Then I remembered that I wanted diced red pepper in the meat, so I pushed the ground turkey aside, and added the diced red peppers to the pan. I let everything cook itself.

Then I mixed everything together, and cooked it a bit longer.

While the meat was cooking, I added spiralized zucchini to another pan and cooked it with some strained tomato sauce.

I topped the zoodles with the magic ground turkey taco meat and mixed everything together.

Honestly, at the time I wasn’t expecting much. I actually apologized to my husband and said, “sorry if this is weird, I was just lazy and didn’t know what to make”.

WELL this Paleo Ground Turkey Taco Zoodles recipe knocked our socks off! I actually started to frantically try to remember what I had done to make this and started taking notes.

Because, I had to make this delicious dish again. I just had to!

So I experimented with the notes that I scribbled down and luckily I remembered it correctly because I’ve been making this magic ground turkey taco meat every since. I used it to make that 7 layer dip that I mentioned above.

And I use it ALL the time to make this Paleo Ground Turkey Taco Zoodles recipe.

My husband and I can eat the whole thing for dinner. But I can see it serving up to 3 people.

Though if you are worried about if this will serve enough, add another spiralized zucchini to the mix and add a bit more strained tomato sauce to the pan while cooking it.

Yay for lazy night success! Please try this and let me know how you like it. 🙂

Oh and if you are looking for a meatless taco bowl option, check out these Easy Vegan Burrito Bowls from Veggie Balance. 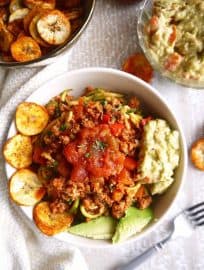 Note: I used the “shredder” blade from my Paderno Spiral Vegetable Slicerto make the zoodles.
Author: Dominique | Perchance to Cook

« Previous PostMy Whole30 Experience: Realizing That I Deserve to be Healthy
Next Post » White Asparagus with a Provençal Lemon Mustard Mayo (Paleo, GF)