I’m just going to come out and say it. This Creamy Mushroom and Chicken Spiralized Potato Casserole is the best casserole that I’ve made in a REALLY long time. Forget that it’s Paleo, Whole30, Dairy-free, and Gluten-free, it’s freaking delicious! Those qualifiers are just bonus points.

The texture of the baked spiralized potatoes and the taste of the peppery creamy mushroom and chicken sauce on top is unbelievable.

I don’t know if these photos do this casserole justice (I’m working on my photography skills 🙂 ), or if they indicate just how creamy it is… it actually kind of boggles my mind. How is a casserole so creamy without butter, cream, or cheese?

I personally think using high quality coconut cream is the answer.. it’s just so delightful to cook with! And no, you can’t taste the coconut… which is a big reason why I like using coconut cream without any preservatives in it.

Quick PSA: If you are following a Whole30 or Paleo diet. Or just looking to eat healthier in general, trust me and get coconut cream without preservatives in it… it’s a game changer. (Savoy has been my go-to for years now. I just order it in bulk off Amazon.)

I know I repeat myself a lot on this, but all of my recipes are tested and created with preservative free coconut milk and cream. As much as I am a proponent of a healthy lifestyle, I’m also just obsessed with really delicious food, and high quality ingredients are the best way to create deliciousness.

Speaking of deliciousness…I’m actually kind of mad at how much I love this casserole.

I know this sounds weird, but hear me out. I went through a Whole30 two months ago, and years of Paleo without having this deliciousness in my life. Howwwww?!

I’m not joking, I have been craving this Creamy Mushroom and Chicken Spiralized Potato Casserole nonstop since I came up with the recipe.

Also, if you haven’t spiralized potatoes before, do it! It’s almost like real pasta satisfaction but with the added heartiness and oomph that a potato has to offer.

Plus, creamy mushroom pepper sauce is DELISH, add in some protein and your golden.

I wish I could make a really big pot of this and have every reader sample it, so that I don’t sound so crazy raving about how much I love this casserole.

But alas, I can not. But I will be making it again this week.

I knew there was no way that I could write this Creamy Mushroom and Chicken Spiralized Potato Casserole post and not make it as soon as humanly possible.

One thing worth nothing, my cooking times are based on the width of the spiralized potatoes… I used the chipper blade from my Paderno Spiralizer, which results in thicker spiral strands.

And please let me know how much you love it, so I don’t think that my taste buds are crazy. 🙂

#perchancetocook and tag me in your recipe. 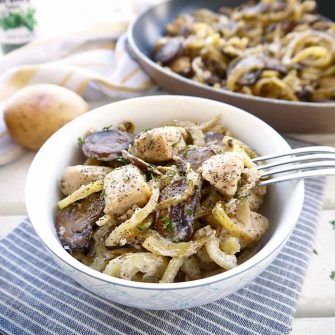 Step 4: Put it all together.