Paleo Whole30 Potato Pancakes that are crispy on the outside, soft on the inside, and incredibly delicious and comforting.

THESE. These Paleo Whole30 Potato Pancakes are one of my favorite things!

For starters, they are crispy on the outside, yet soft on the inside… ( this is thanks to shredding half the potatoes and mashing the other half…).

They are also ridiculously delicious and versatile all while being grain-free, Paleo and Whole30 compliant.

What are potato pancakes?

They are a cross between hash browns, mashed potatoes, and pancakes.

They make everything better and they are so satisfying and fun!

I like changing things up in my diet. And these certainly take potatoes to a whole other level.

Ingredients needed to make them:

What to serve these Paleo Whole30 Potato Pancakes with:

After I made these for the first time, I ended up eating them for several meals.

I ate them with chicken sausage and sautéed kale for dinner.

I ate them with bacon and over-medium eggs for breakfast.

And I also ate them as a snack topped with some greek yogurt mixed with chives and pepper. If you can have dairy, this dip is really great with them!

I love that these Paleo Whole30 Potato Pancakes remind me of my time in Northern Ireland. I used to live in Belfast and during that time traveled a lot in Ireland.

I tried many an Irish potato pancakes while I was there and loved each and every one.

In Ireland they are called Boxtys, and are made using a similar technique to this recipe… using part shredded potatoes and part mashed potatoes.

There was a stand in the train station that I used to go to where someone would make them fresh, and then they would be served warm in these little bags. They were SOOOOO good. Especially on a cold day.

Ahhh I think it’s time for me to make this recipe again.

This recipe is adapted from the Traditional Irish Boxty Recipe from Fusion Craftiness. I relied on her tips and techniques and then I paleoified the recipe to make it gluten-free and whole30 compliant. It worked great!

If potato snacks are your thing, ( how can they not be?!), I highly suggest checking out these Gluten-Free Croquetas from Eat at Our Table.

If you like ranch dressing, I highly recommend this Dill Ranch Potato Salad with Avocado and Eggs 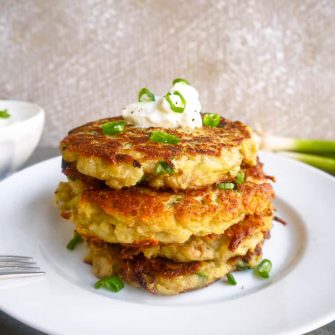