If I could have this healthy Cinnamon Banana Bread with a cup of tea every morning, I would be a happy lady!

There’s just something about having a slice of this warm, fluffy, and fragrant Paleo banana bread laced with cinnamon goodness that cheers me right up.

It makes me happy to know that this recipe is made without any butter and without any refined sugars or flours.

It has all the same great taste as a classic banana bread recipe, but I think it tastes even better!

Bold statement, I know. But I truly find healthier baked goods to taste better than their “unhealthy” counterparts.

Don’t get me wrong, I like my baked goods to taste sweet, to be full of flavor and, and to have a good texture.

BUT I find that they taste better without too much sweetness, and without the heaviness that butter tends to bring to baking.

I love eating baked goods that you would never know are “healthy”; they just taste amazing! ( And you still feel good after eating them ).

The healthiness and deliciousness factor is all about the ingredients, especially in this healthy dairy-free banana bread!

There have been so many advances in the clean eating arena, that either didn’t exist before or that weren’t as readily available.

A few years ago, I would only use maple syrup or honey to sweeten my recipes and now I also use coconut sugar, maple sugar, and dates.

Coconut sugar and maple sugar are my favorites and are great brown sugar replacements.

This recipe is gluten-free because almond flour, tapioca flour and coconut flour are used instead of regular flour.

The combination of those three flours works great in banana bread. The bread is moist and full of protein and just delicious!

I find that it is easier now more than ever to make a healthier version of many recipes.

The texture is just on point. It’s moist and fluffy inside, yet it has a nice crust on top.

It’s got lots of great banana flavor, with hints of cinnamon. It’s sweet, but it’s not too sweet.

And it just tastes delicious!

It’s a perfect breakfast or snack or dessert. And it is a crowd pleaser.

Other healthy banana bread recipes you may enjoy:

Gluten-free Vegan Banana Chocolate Chip Muffins– made with simple ingredients and naturally gluten-free. Recipe by A Dash of Megnut.

This Almond Flour Banana Bread from Four Score Living is made with simple ingredients for a healthy banana bread option. 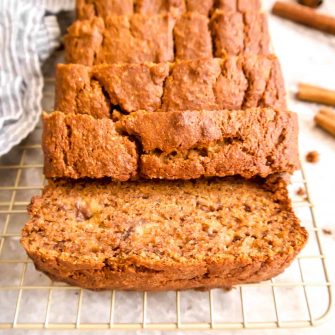