The worlds of coffee cake and banana bread were meant to combine!

I mean, extra cinnamon and crumbly cinnamon streusel are the perfect additions to banana bread. So yum!

And if that banana bread is made with healthier-for-you ingredients, it’s a major win in my book… which is the case with this naturally dairy-free and gluten-free Paleo Coffee Cake Banana Bread.

I luckily had 5 really ripe bananas that needed to be used up the other day. I froze two for smoothies and then used the remaining three to make this Paleo Coffee Cake Banana Bread.

I had been craving coffee cake ( #pregnancycraving ), and thought why not make a banana bread coffee cake hybrid.

The result was AMAZING and I had so many people on my Instagram stories ask for the recipe that I knew I needed to post it ASAP.

Note: I love to use ceylon cinnamon. It has a much richer cinnamon smell and taste.

Even though I have been baking with Paleo and Gluten-free ingredients for years, it still amazes me to this day how amazing recipes can be when using alternative healthy ingredients!

How to make this banana bread:

In the first bowl, you mix the olive oil, coconut sugar, eggs, vanilla and mashed bananas together.

In the second bowl, you mix the almond flour, tapioca flour, coconut flour, baking soda, salt, and cinnamon together.

In the third, and final bowl, you mix the streusel together. Which is almond flour, cinnamon, unsweetened cocoa powder, coconut sugar and olive oil.

After that, you pour half the batter into a loaf pan, and sprinkle it with half of the streusel. Then, you repeat with the remaining batter and streusel and bake!

You can use coconut sugar or maple sugar here. Both work great and both are Paleo and Gluten-free.

Use a light colored extra virgin olive oil. You don’t want to use olive oil that tastes very olivey.

The bake time will depend on your oven. I don’t know if my current oven is very hot, but I’ve noticed my baked goods cook a bit more quickly in my current home. 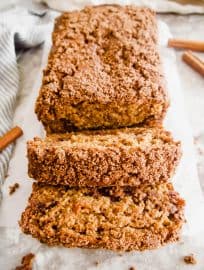