I love treating myself to a refreshing cool drink on a hot summers day… if you couldn’t tell by some of my recent posts. 🙂 And this Refreshing Cucumber Watermelon Juice takes the cake!

The combination of all these hydrating, vitamin-full fruits and veggies… ok, mostly fruits, results in a juice that will leave your body feeling revived and refreshed after drinking it.

It’s seriously DELISH. It tastes kind of like a lemonade mixed with watermelon and cucumber. NOM NOM NOM.

And I’m planning on making myself a big batch to have in the fridge so I can just chug it whenever I come back from being outside… ( I live in FL and it is currently REAL hot).

But even if it wasn’t 90-something degrees, I’d still want this Refreshing Cucumber Watermelon Juice because I feel so amazing and hydrated after I drink it.

It think it is because there’s so many vitamins and minerals inside… which is why I am such a big fan of juicing! It’s seriously been my life-source for more years than I can even remember… maybe 8?

You’d think that for someone that has been juicing this long, they would have tried juicing watermelon before. However, coming up with this recipe was actually my very first time!

I probably would not have tried it had I not been craving watermelon so badly haha.

You see, I recently went on vacation and didn’t eat the best. I went into it saying I would be healthy and would make sure to eat well… and I did try, buuuuuut not as well as I would have liked.

And so by the end of my trip, I was craving watermelon and wanting to get back to my juicing routine.

SO I decided to kill two birds with one stone and make a juice with watermelon in it. And the result was this Refreshing Cucumber Watermelon Juice and I’m in love.

Hope you love it too! 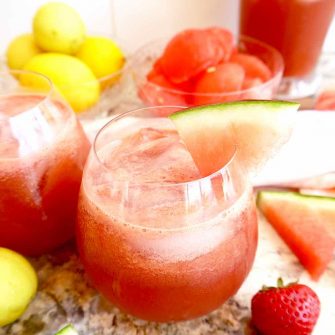