You know that feeling when you perfect a recipe?? The one that makes you want to yell, “Eureka, I’ve got it!”

It is rich and velvety and just tastes soooo good!

It’s basically everything beautiful about a regular bolognese but with added pumpkin puree and Fall spices.

This Paleo Pumpkin Meat Sauce Ragu is the second Fall Harvest recipe that I have made while partnered up with US Wellness Meats.

I used their ground pork, grass-fed ground bison, and grass-fed lean ground beef for this recipe, all of which has no antibiotics and hormones.

The key to this pumpkin bolognese recipe is mixing grass-fed lean beef, with ground bison, and ground pork. AND then mixing pumpkin puree with ground nutmeg, cloves, cinnamon, and ginger prior to adding it to the sauce.

Using quality meat in this recipe makes a big difference in the flavor.

I mentioned this in my Butternut Squash & Chicken Soup post, but feel like I should mention it again. I was offered products from US Wellness Meats in this post, but they did not ask me to share my opinions on my blog.

My opinions are 100% my own; I just love sharing quality finds! I have also bought products from them on my own.

Keys to the flavor in this Paleo bolognese / pumpkin ragu:

(1) Using three different types of meat, something my mother does often in her recipes, adds so much dimension and flavor.

This is definitely one of the keys to the flavor in this dish.

I’ve actually never use ground pork when making meat sauce before… and that is going to change because it adds a sweetness, more authentic flavor to the sauce.

Plus the extra fat in the pork compliments the leanness of the ground bison.

Ground bison tastes heartier than ground beef, but it too makes the sauce taste a bit sweeter, and a bit more rich, like a Ragu.

Note: if you don’t have bison, use beef in it’s place!

(2) Using the right seasoning is another key.

One of the best parts of this Paleo Pumpkin Meat Sauce Ragu, is that the seasoning is ON POINT!

The ground beef, bison, and pork are seasoned with rosemary, basil, oregano, and thyme.

The pumpkin puree is seasoned with ground nutmeg, cloves, cinnamon, and ginger.

And the spiced pumpkin added to the sauce almost adds a spiced wine flavor to everything. Which really makes this ragu rich.

(3) Chopped tomatoes are another key to the flavor.

I personally always use Pomi brand tomatoes when I make meat sauce, another trick from my mother, because it just tastes the best.

There is something to be said about tomato products with no artificial flavors, preservatives or citric acid. Classic meat sauce was not meant to have any of those things in there!

How to serve this pumpkin bolognese:

Please make this, tell me if you like it, and hashtag #perchancetocook 🙂 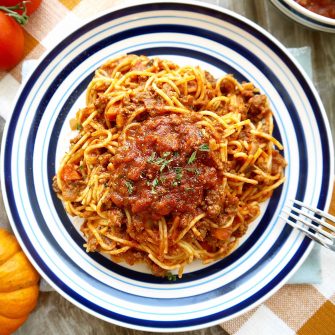 Note: if you don’t have bison, use beef in it’s place!
Tried this recipe?Let us know how it was!