I’ve been making this Paleo Bison Bolognese a lot lately. Bison has less fat than beef, so the whole meat sauce has a lighter feeling, while still being very rich, flavorful, and super satisfying. This extra “lightness” makes it the type of Italian sauce you could eat all year long, including in the summer heat!

Also, this sauce is incredibly versatile, so you can use it to make SO many delicious healthy meals. It also works wonders as leftovers. Paleo meat sauce for the win!

Prior to making this recipe, I had bought quite a bit of grass-fed bison and wasn’t sure what to make with it. I love bison because it is leaner than beef and both my husband and I find it to be easier to digest than beef.

My first thought when it comes to ground meats is always “meat sauce”. So I thought, what about a bison bolognese / meat sauce!?

Honestly, meat sauce is incredibly versatile and I love anything and everything that it is on. I could eat meat sauce literally once a week and probably do, now that I think about it.

You can eat meat sauce on zoodles, or spiralized potatoes. You can eat it on gluten-free pasta or even sloppy joe style on any type of bread of your choosing.

So the more I thought about how delicious meat sauce is and all the things I could do with it, the more I became convinced that this was the plan.

And this is how this Paleo Bison Bolognese came to be.

I realized that I had never made an all bison bolognese on the blog before despite how much I love it!

So I decided to take notes on my favorite way to make it. 🙂

During the process I started to wonder what is the difference between bolognese and meat sauce? And apparently bolognese traditionally has white wine and cream in it? I may be wrong but I read about this on the world wide web. 🙂

To me, though, bolognese has always been synonymous with meat sauce and this seems to be the case with many other people… or so I found while searching online.

With that in mind this Paleo Bison Bolognese is made with ground bison that has been seasoned with onion, garlic, carrots, tomato paste, basil and oregano. And then it is cooked in strained and chopped tomatoes.

I added thyme and sage here, which were the perfect finishing touches. Perfection! 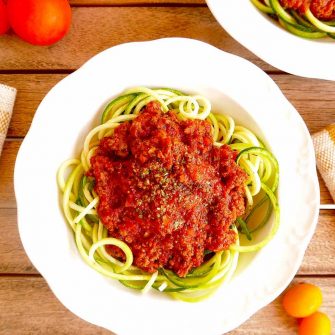