I love this coffee cake because it’s moist and pumpkiny and filled with cinnamon, cloves, ginger, and nutmeg spices. It’s topped in a delightful cinnamon maple streusel, all while being Paleo and Gluten-free.

Give me a pumpkin baked good this time of year and I am a happy lady!

Seriously… I could eat one of these Paleo Pumpkin Pie Chocolate Chip Cookies or a slice of this Pumpkin Carrot Cake With Almond Maple Drizzle pretty much any day of Fall.

Oh and add this Pumpkin Mug Cake ( which is Paleo and Gluten-free) by Everyday Maven to the list. It cooks in 3 minutes, in the microwave. UM yes please!

And now I have this Paleo Gluten-free Pumpkin Coffee Cake to add to the list.

It’s basically the best of the pumpkin and coffee cake worlds!

This Paleo Gluten-free Pumpkin Coffee Cake has a moist, fudgy pumpkiny cake base that is seasoned with cinnamon, cloves, ginger and nutmeg.

The pumpkin cake portion of this dessert is really more fudgy than cakey, but it is still cakey… it’s hard to explain the texture but it’s delicious and that is all that matters. 🙂

And if that wasn’t good enough, it is topped in a crumbly yummy cinnamon maple streusel. I love this streusel topping. It’s so simple but so crumbly and satisfying.

The maple syrup adds a great sweetness to it that pairs really well with the pumpkin cake underneath it.

How to make this pumpkin coffee cake:

Then mix the coconut sugar, eggs, and pumpkin puree in another bowl.

Combine the dry ingredients into the wet ingredients and mix, then put the batter into a pan.

Then, make the streusel topping by mixing some almond flour, cinnamon, olive oil and maple syrup together.

Sprinkle the streusel on top of the pumpkin coffee cake batter and then bake!

Note: if you want this dessert to be sweeter, then you can add more coconut sugar to the pumpkin cake base.

One of the best parts of this Paleo Gluten-free Pumpkin Coffee Cake, aside from how good it is, is how versatile it is.

It’s one of those baked goods that truly works for any time of day.

And since it is pumpkin and cinnamon flavored, it adds a seasonal, festive element to your day… which I love!

Hope you enjoy it as much as I do! 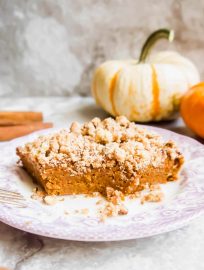