Paleo Gluten-Free Apple Crumb Muffins recipe. Light and airy Paleo apple muffins that taste like apple cinnamon donuts! They are made with almond flour and olive oil, making them also Grain-free and Dairy-free.

These Paleo Gluten-Free Apple Crumb Muffins have become my new favorite breakfast muffin. Besides the fact that they are filled with the best cinnamon apple flavors, they are also light and airy and almost taste like a donut.

I wasn’t sure if it was just me, but when my husband said that he thought they kind of tasted like a donut too, I knew these Paleo apple muffins were going to be a hit!

Ahhh baked apple goods, that kind of taste like donuts ( old fashioned baked donuts, that is)… these are my kind of treat!

I did quite a bit of research as to what makes for a good apple crumb muffin… and then I got to recipe testing because I knew I needed Paleo apple streusel muffins in my life.

Make sure you have a grater of some sort as well because you need to shred some of the apples for this recipe. I use a cheese grater that I have and it works great here.

The keys to making these almond flour apple muffins:

The key is using both chopped and shredded apples. This ensures that the apple flavor is distributed but that there are also chunks of apple.

The other key ( which comes from my own trial and error research) is a mixture of almond flour, tapioca flour, and coconut flour…

This gives these muffins great texture, while letting them remain Paleo, Gluten-free, and Grain-free.

Cinnamon and nutmeg spices, to be precise.

In circumstances like these Paleo Gluten-Free Apple Crumb Muffins, I feel like cinnamon and nutmeg were made to be paired with apples. Specifically in baked good form.

They add a richness to baked goods that makes them extra satisfying.

I always love using ceylon cinnamon above other types because it has a rich, deep, cinnamon smell and taste. If you have more than one type of cinnamon on hand, try doing a smell test.

Ceylon cinnamon wins every time! Plus cinnamon has antioxidants in it, so… the more the merrier!

I had a friend taste test them out. I wanted to make sure that my taste buds weren’t partial to my baking, and she loved them!

She actually yelled “These are so good!” within seconds of taking a bite.

She also didn’t know that they were gluten-free, grain-free, and dairy-free which is another good sign.

These paleo apple streusel muffins taste really great with coffee or tea and really brighten up the morning.

If you are in the mood to bake and have some extra apples lying around, I highly recommend making these!

These Gluten-free Apple Muffins from my friend at My Gluten-Free Kitchen are a drool-worthy apple muffin recipe.

These Paleo Chocolate Banana Muffins (Dairy-free, Gluten-free) are basically chocolate banana bread in muffin form and they are SO good.

These Paleo Orange Cranberry Muffins ( GF, Grain-free ) are one of my favorite muffins. The flavor combo of orange paired with tart cranberry is perfect! 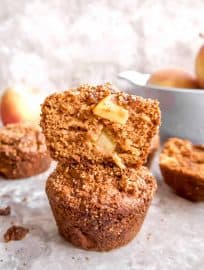