I had been meaning to post this recipe, but I was out of commission for the past week. I’m hoping to be back to cooking and experimenting in the kitchen soon, but until then this Paleo German Chocolate Cake recipe should suffice.

This cake is amazingly good! Moist chocolate cake frosted in a rich caramel coconut sauce, why have I never made this before?! Normal german chocolate cake has pecans in it, but since I am allergic to them, I made it sans-pecans. And it is wonderful this way. So wonderful, that I forgot that it was Paleo.

This recipe came to life because I craved coconut, caramel and chocolate at work. I just couldn’t get the thought of those three flavors together out of my head.

And even though I had never had german chocolate cake before, I wanted it.

I mean, how can the flavor combination of coconut, caramel, and chocolate not go well together?!

To have it, I had to come up with a good caramel sauce first.

So I made this Paleo Caramel Sauce and fell in love with it!

I mixed some shredded coconut into the caramel… which is AMAZING.

And when I tasted it, I knew that it would taste awesome with chocolate cake.

The chocolate cake was the tricky part for me, so I looked at my Fudgy Brownie recipe, one of my many muffin recipes, and then two other chocolate cake recipes for some guidance.

I mixed and matched what I liked about each recipe and came up with this Paleo German Chocolate Cake recipe.

I love when recipe experiments work the first time that I try them.

Here’s a secret of mine….recipes that work out on the fly tend to be my best recipes. 🙂

So when this cake turned out so moist and tasty, I was thrilled. NOM.

The main observations that I have about this cake is that it was a little bit crumbly, but cake is crumbly!

I also would add way more caramel coconut sauce next time, which I reflected in the recipe.

I used 1/2 cup of caramel sauce, but next time would make 1 cup of it.

Also, you have to make sure to put the avocado in the food processor.

You’ll still see some green flecks in the cake, just so you know its healthy 😉

And it cuts more easily once it has been chilled.

You’ll notice that the caramel coconut sauce lightens in color once it has been chilled.

Also, the coconut caramel frosting can be super wet, if you don’t cook the frosting for so long OR it can be more concentrated in texture, if you cook the caramel for more time and thicken it.

Check out the old vs. the new photos below:

The only thing I have left to say is….make this cake!

Especially if you like caramel, chocolate and coconut together.

This has been used for many a birthday over the years. 🙂

Oh, and if you are looking for a similar cake but, Keto…. check out this Keto German Chocolate Cake from my friend at Cassidy’s Craveable Creations. 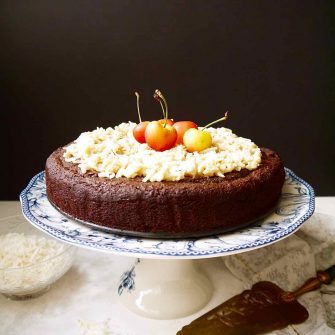 Note: if you don’t want to use baking powder, use 1 1/4 tsp of baking soda and add 1 Tbs of lemon juice to the cake.
Tried this recipe?Let us know how it was!