I can’t get enough of peaches lately. They are just so beautiful!

They smell beautiful and fill my kitchen with the distinct aroma that only peaches have. They taste beautiful raw… nothing tastes better than a ripe summer peach! And they bake beautifully… Hello Paleo Peach Crumble! 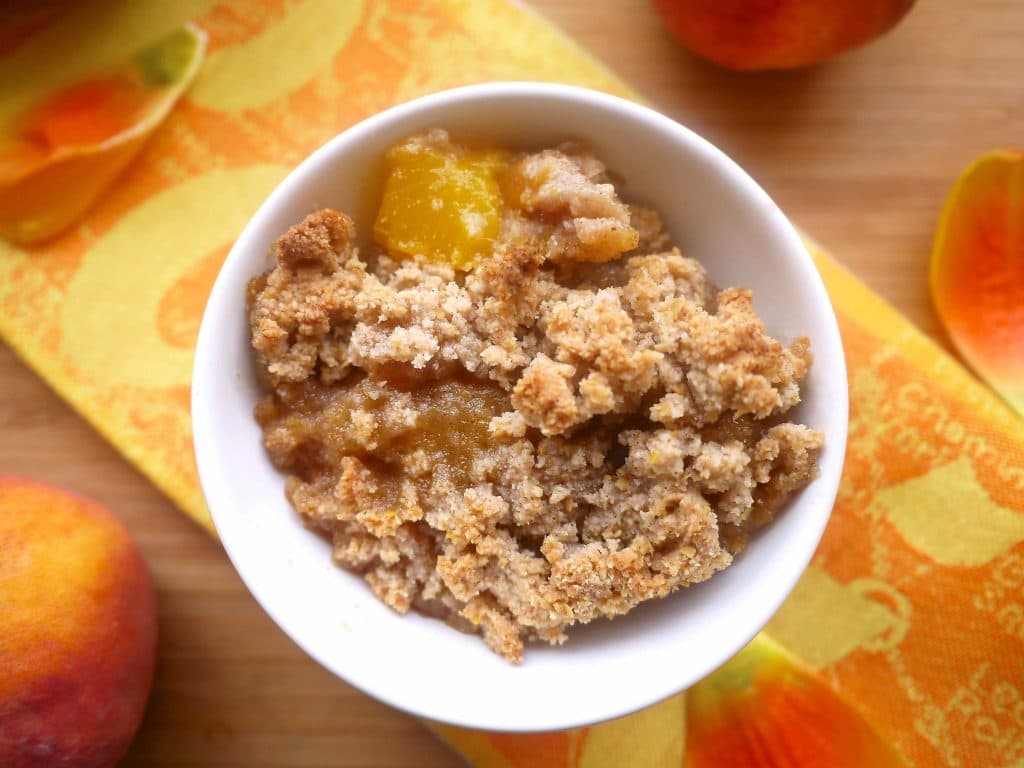 I am so into this Paleo Peach Crumble.

The way that the peaches bake here result in a fragrant yummy dessert with lots of peach flavor… it’s a little sour, a little sweet, and oh so peachy delicious. 🙂

Especially with some dairy-free ice-cream on top. 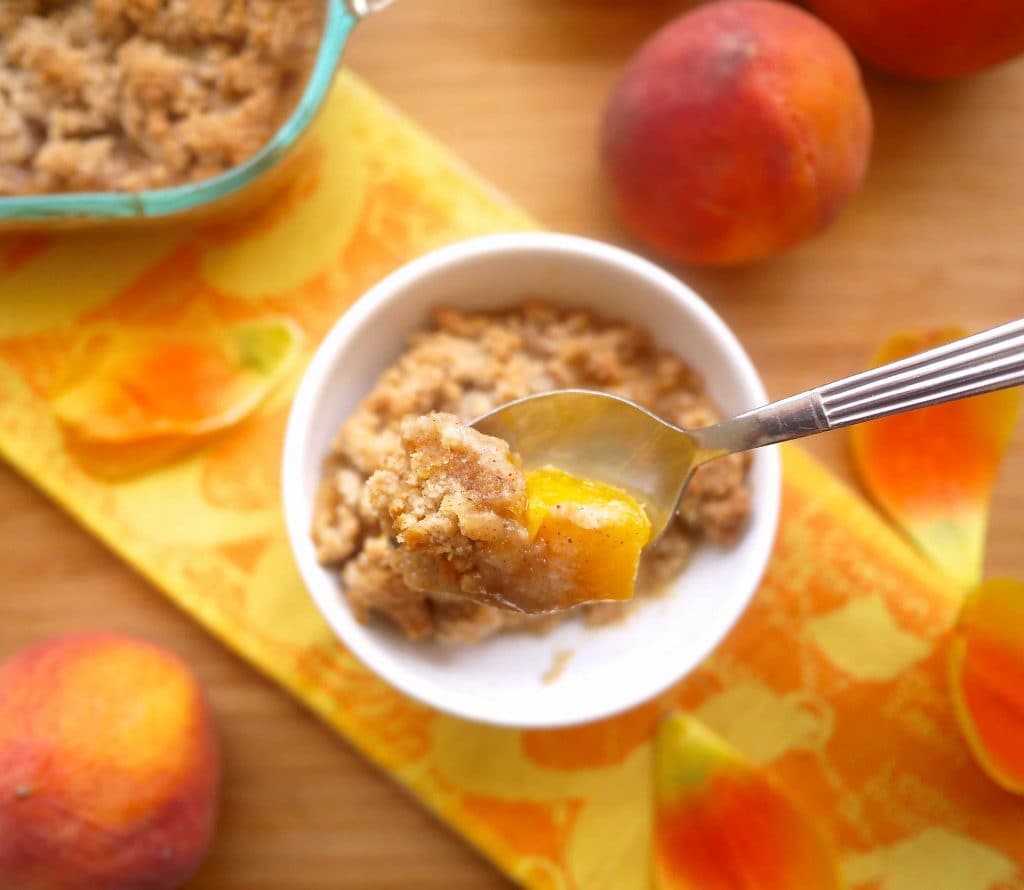 To make the filling, I peeled 3 large peaches and diced them. You could leave the peach skin on top, but the texture isn’t as great in this particular dessert.

Then, I covered the peaches in some honey and lemon juice, and mixed everything together really well.

The honey and lemon juice enhance the peach’s natural flavors and sweetness while cooking. 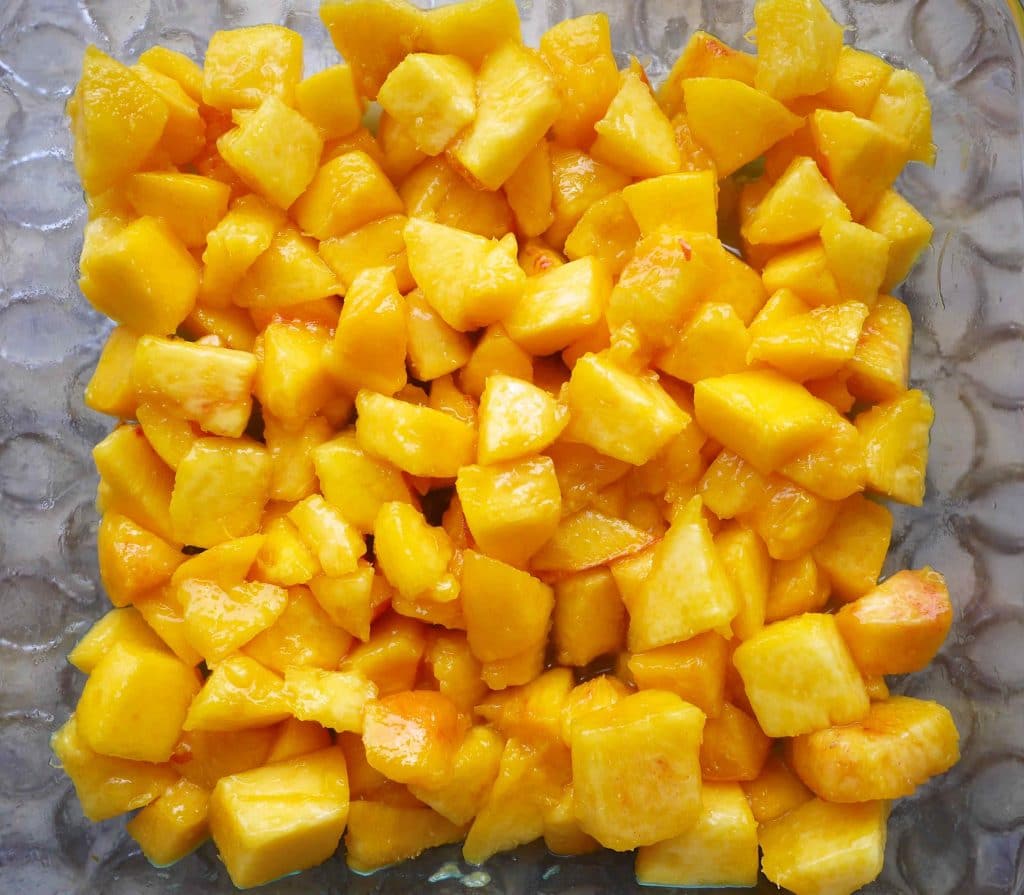 Then I made the topping, which was inspired by my Apple-Pear Cinnamon Crumble recipe.

I removed the ground flax seeds from the recipe because I found the flavor of flax seeds a bit overpowering for the peaches.

I mixed the almond flour, cinnamon and nutmeg together in a bowl.

Then in a separate bowl, I mixed together the coconut oil and maple syrup until the mixture thickened. 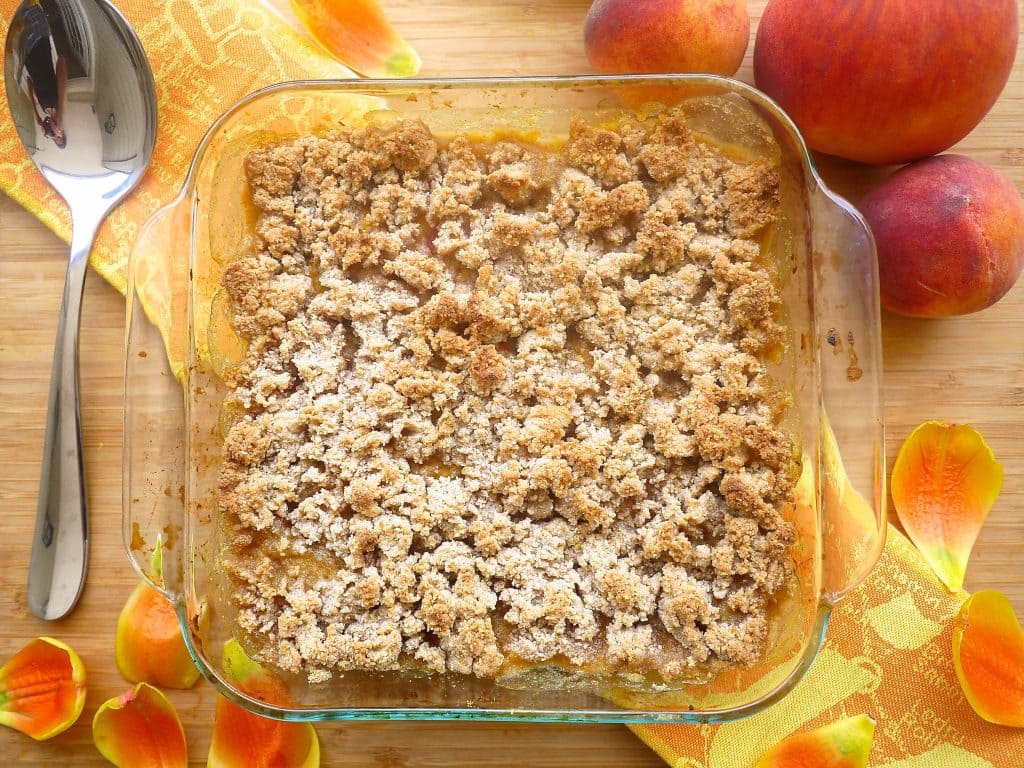 Here is a helpful tip… rake the almond flour topping with a fork, to get it to have a more “crumbly” texture.

So when you pour the almond flour mixture on top of your peaches, it has a nice crumbly texture.

It then bakes this way, which gives the whole dessert it’s much desired “crumbly” texture. 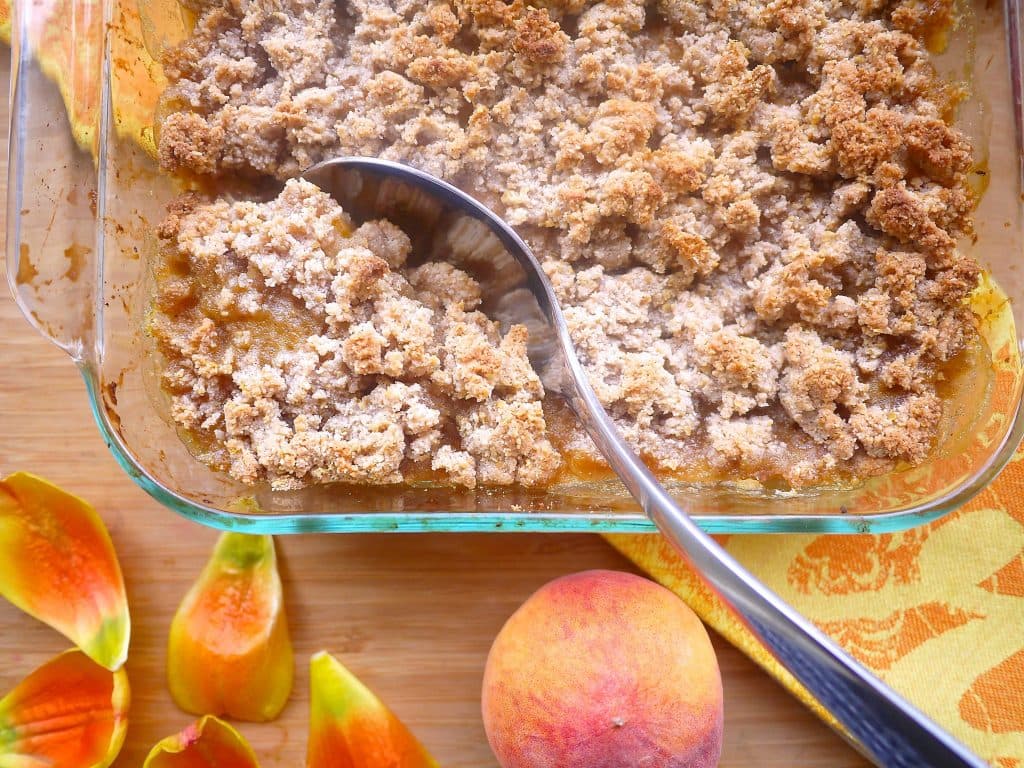 Next, I baked the Paleo Peach Crumble for 30 minutes at 375 degrees, until the peach juices almost caramelized, and the crumble was golden.

The peaches literally melt underneath the almond flour crumble topping when baking.

It smells and looks so good, it’s hard to wait to take a bite. 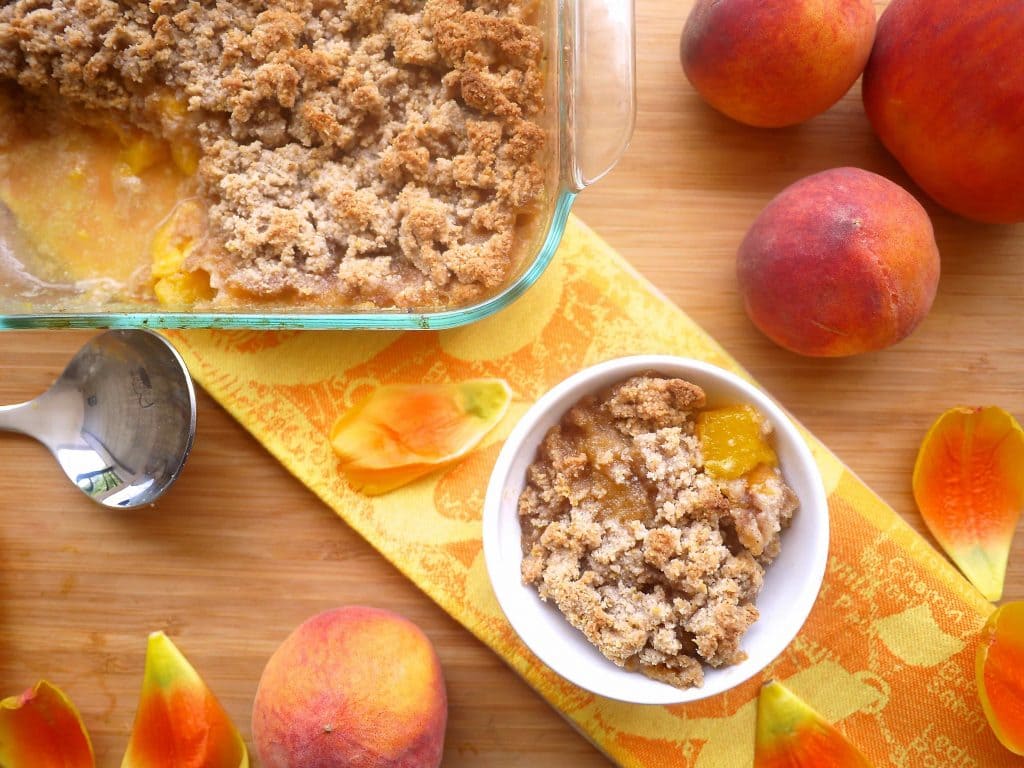 It’s truly an amazing summer dessert. Something that I could eat pretty much any time of day.

For breakfast, as a snack or even for dessert. 🙂 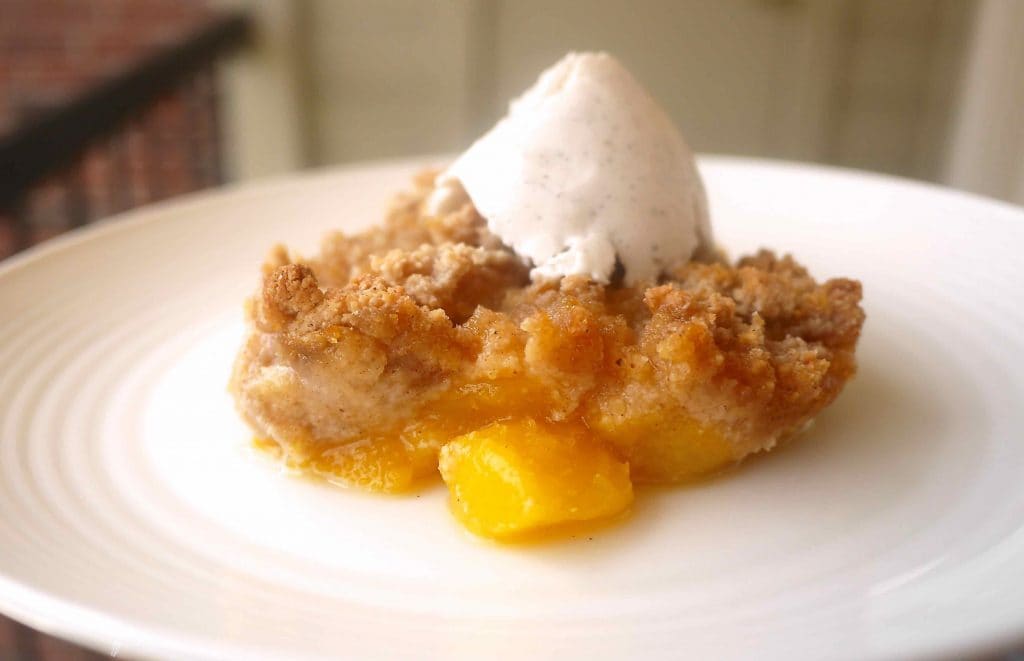 I topped mine with some DF Mavens Madagascar Vanilla dairy-free ice-cream (made with coconut extract), refreshingly decadent! 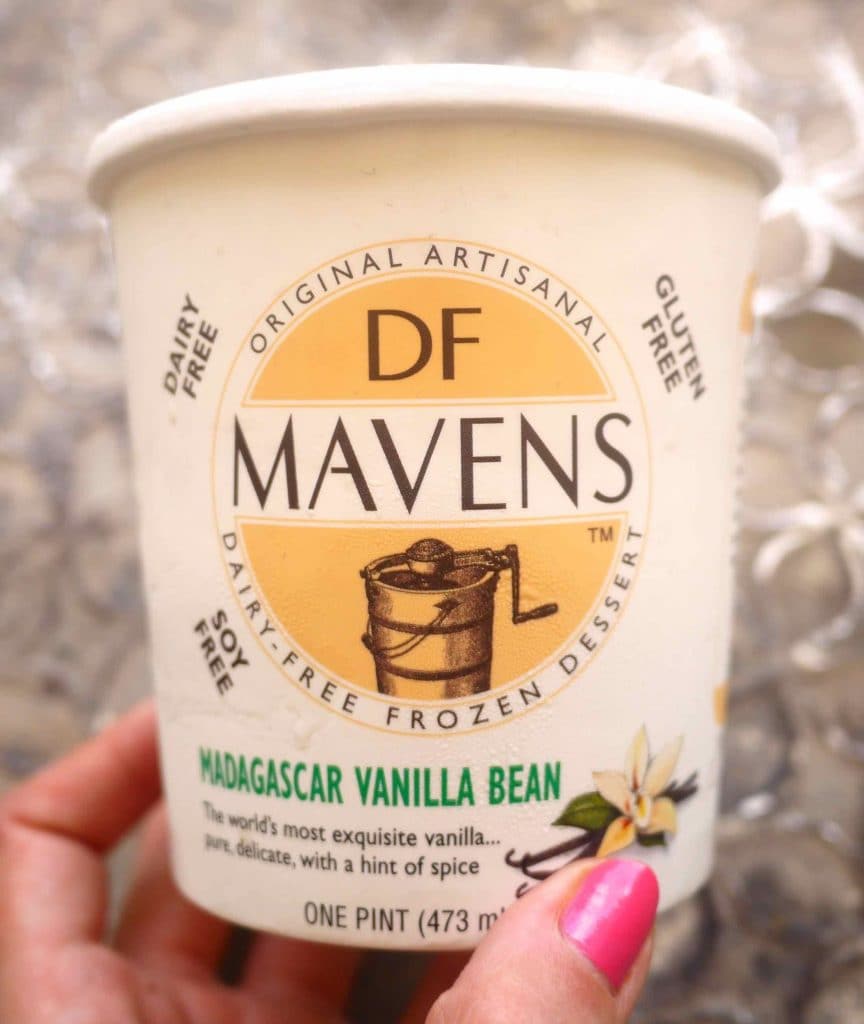 Note: if you want extra fiber and Omega 3’s, feel free to add some ground flaxseeds to the almond flour topping. 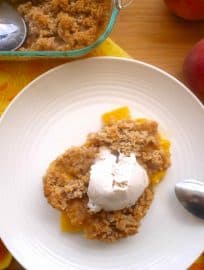