I’ve got another Paleo waffle recipe coming in hot for you! These Paleo Apple Cinnamon Waffles are light and fluffy and crispy in the way all waffles should be. They are also laced with cinnamon and cooked apple goodness and topped in a delicious maple syrup apple compote. All while being naturally grain-free, gluten-free, and clean.

They are basically an apple cinnamon lover’s dream. And they are calling your name! Seriously.

I know these Paleo Apple Cinnamon Waffles are full of “Fall” flavors…. there’s apple, cinnamon, and nutmeg… which all goes SO well together.

But, I didn’t want to keep these delicious waffles all to myself until next Fall! That would be just wrong.

I also don’t like being limited to only having certain flavors at certain times of the year.

And I assume many of you are like me and don’t want to only eat apple cinnamon goodness in the Fall.

I personally think “cinnamon and apple” really is a universal all-year-long flavor combination. Which is evident by this post and by the fact that I’ve made this recipe 3 times in the last month alone. 🙂

Yup three times! But they are just too good to make only once.

Honestly, these Paleo Apple Cinnamon Waffles are to-die for. They’ve got cooked cinnamon apples INSIDE the batter and then they are topped with a maple syrup apple compote and drizzled with chia seeds and almond butter.

Oh and I grated fresh nutmeg on top of all of my waffles as well. Which put it all over the edge.

True story: I had three taste testers try them and they all raved about how good they were. They actually didn’t speak until the waffles were finished, but I heard many YUMS in between bites.

The smell of these waffles alone woke up a member of my household. Who wouldn’t want to wake up to the smell of cinnamon apple waffles?!

I used a mixture of almond flour, coconut flour, tapioca flour, and arrowroot flour here. I’ve found that the combination of all of these flours works best for grain-free waffles.

I also like whipping the egg portion of the batter until it is frothy and THEN adding the flours in. The batter should look like this…

I know I have been on a healthy waffle kick lately… which can be seen by my two recent recipes:

But with how delicious they are all turning out, it’s not a bad thing. Not at all. 🙂

Plus, I feel like I’m really on a Paleo waffle roll, so I’m just going with it.

Can’t have too many healthy waffle recipes around, if you ask me! 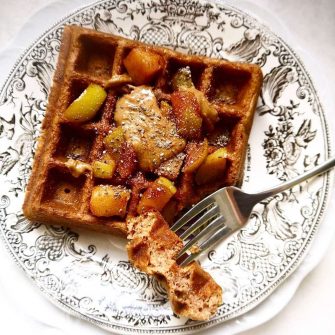