Bone Broth Gravy recipe. A quick and easy gravy recipe made from bone broth that is dairy-free, gluten-free, Paleo, and Whole30.

Bone Broth Gravy, oh how I love thee! It took me a few tries to get this recipe right, but I finally figured it out. And it doesn’t require you to roast a chicken or a turkey in advance.

This Bone Broth Gravy is dairy-free, gluten-free, grain-free, and paleo. It’s great on potatoes, cauliflower or meat, and it only takes about 5 minutes to make! How great is that?!

Gravy has always been a bit of a mystery to me. And something that I knew I could rarely have because… how often am I roasting a turkey or chicken and making gravy out of the drippings at the same time??

That kind gravy is delicious! But it requires the whole roasting a chicken or turkey thing.

And sometimes you just want to whip up a quick gravy and be done with it. Pour it on some mashed potatoes and call it a night.

Can you use bone broth to make gravy?

Why yes you can!

As the title of this recipe suggests, you certainly can!

Now I feel like I need to be clear here. This Bone Broth Gravy doesn’t taste like the gravy you’d make if you used the drippings from a roasted turkey or chicken.

Buttt it’s really delicious in it’s own way because it’s made from bone broth and is seasoned with lots of yummy spices like rosemary, thyme, and parsley.

How to make paleo gravy

This Bone Broth gravy is easy to make!

To start, melt the butter of ghee in a saucepan and add the tapioca flour and coconut flour until it clumps together.

Then add the bone broth to the pan, along with salt, pepper, parsley, rosemary, thyme, garlic powder and onion powder and whisk.

Then whisk every so often until the mixture thickens. I would let things simmer for 30 seconds and then I’d whisk it for 10 seconds for about 5 minutes.

I originally had issues figuring out the flour ratio for this recipe.

I tried making this gravy with only coconut flour, and even though it tasted great, the texture of the gravy was SUPER gritty.

Then I tried making it with only tapioca flour, but the gravy became slimy. Has anyone else experienced tapioca flour slime?? EW.

Put only using a little tapioca with a little coconut flour resulted in just the right texture. 🙂

My husband loves when I cook with bone broth because of the high protein content and because of how it makes him feel.

Bone broth is a great food for gut health. It has loads of immune boosting minerals and is known to help reduce inflammation in the gut and intestines thanks to the collagen inside.

I personally love cooking with it because it adds a nice rich flavor to my recipes. 🙂 It’s great in chicken soup or in sauces. And this Bone Broth Gravy is no exception.

I’m glad I did finally get this recipe right though, because us dairy-free, gluten-free, grain-free, paleo folk deserve a yummy gravy recipe.

Note: If you have roasted a chicken or a turkey… for example like many of you will this Thanksgiving or holiday season. Then add the chicken/ turkey drippings to this gravy recipe at the very end of the recipe and mix. This will really kick your gravy up a notch!

Also, if you are looking for alternative GF gravy recipes, check out this Gluten-Free Gravy by my friend at Gluten-free Palate.

Other bone broth recipes you may enjoy: 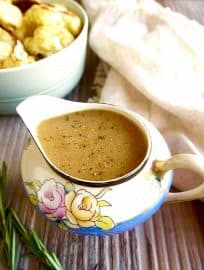