You can not let peach season pass you by without making this Paleo Vegan Peach Cobbler. It’s got a juicy fresh fragrant peach filling, and a nutmeg and cinnamon spiced cake topping.

It’s basically the inside of a peach pie, topped with a cinnamon cake. And it’s amazing! Especially served warm with some ice-cream on top.

This cobbler is also naturally gluten-free, grain-free, and dairy-free AND is the perfect summer dessert- made with healthier, real food ingredients!

I bought a big box of peaches at Trader Joes this week, with no real plan to cook or bake with them. I honestly planned on eating one a day, however, the baking itch hit me.

Before I knew it, I was quickly writing down a recipe to make while my little one napped.

Luckily for me, she did two naps in a row! And the result of my free time is this amazing Paleo Vegan Peach Cobbler.

How to make this Vegan Peach Cobbler:

Note: you can use arrowroot instead of tapioca flour. It’s important to use either tapioca flour or arrowroot flour because this results in a thick peach filling ( rather than a watery one).

The peach filling here is particularly fantastic because it tastes like the inside of peach pie.

Then, add the peaches to a baking dish and set it aside.

Step 3: put it together

Put the cobbler batter on top of the peaches in the pan and bake!

It’s tastes like a yummy cinnamon cake, and is made with a combination of almond flour, coconut flour, and tapioca flour.

I wasn’t sure if I should add lots of cinnamon and nutmeg spice, but I am really glad that I did because it really gives this dish a great balance and burst of flavors.

It pairs with the peaches SO well.

How to serve this Paleo Peach Cobbler

I highly recommend serving this cobbler with ice-cream on top or with cream on top. It enhances the peach flavor and adds the best creamy flavor and texture.

When this Paleo Vegan Peach Cobbler is served warm with ice-cream on top, it is almost too good to be true.

As soon as my husband tasted it, he declared that I needed to open up a dessert restaurant because of how good my healthy desserts are.

I hope you can enjoy this Paleo Vegan Peach cobbler while peaches are in season!

Other healthy peach recipes you may enjoy:

This Southern Peach Cobbler by Evolving Table looks so good! It has a yummy gluten-free cake-like topping and the most yummy looking baked peaches. NOM

This Paleo Peach Crumble has got great peach flavor and a yummy Paleo topping!

This Dutch Oven Peach & Maple Chicken Thighs recipe has been a reader favorite for years! The sweet peaches pair so well with the savory chicken. YUM. 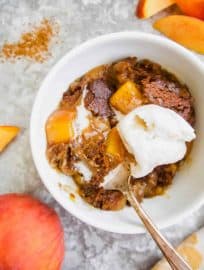 Note- you can use maple sugar or brown sugar instead of coconut sugar if you would like. Though brown sugar is not Paleo.
Course: Dessert
Cuisine: American
Keyword: peaches
Author: Dominique | Perchance to Cook