Paleo “Everything Bagel” Almond Crackers recipe. Grain-free crackers made out of almond flour and seasoned with “Everything but the bagel” spices.

Jump to Recipe Jump to Video

I had a few different recipes that I had intended on sharing, but I really really wanted to share these Paleo “Everything bagel” Almond Crackers ASAP.

They are my current favorite Paleo snack! And they are quickly going to become yours. Think everything bagel seasoning meets Paleo crispy cracker. I’m obsessed.

These Paleo “Everything bagel” Almond Crackers are lifesavers for when you are craving something crunchy. And since they are made with almond flour, they are chock full of healthy protein.

But I do have to warn you, these are dangerous… as in, you may not stop being able to eat them dangerous. Don’t say I didn’t warn you!

Ingredients needed to make these Paleo “Everything bagel” Almond crackers:

I had tried to make these with coconut flour and coconut oil, but I really didn’t like the taste with either of these ingredients inside, so I resolved myself to using olive oil and almond flour.

Then, I tried using paprika and garlic as the main seasoning but something was missing…

I remembered my new found love of the “everything bagel” seasoning… the stuff from Trader Joes is a favorite of mine!… and knew that I had found my answer.

I took the seasoning of an everything bagel, and mixed it into the Paleo cracker dough that I had been working on and BOOM. These Paleo “Everything” Almond Crackers came to be.

How to make everything bagel seasoning almond flour crackers:

(2) Then, add the olive oil, vinegar, and egg to a food processor and mix. Then add the almond flour, baking soda, and some of the “everything but the bagel” seasoning and mix again. The mixture should form into a thick dough.

(4) Put the dough in between two pieces of wax paper and flatten with a rolling pin.

(5) Sprinkle more “everything but the bagel” seasoning.

(7) Put the pieces onto a cookie sheet and bake!

These crackers really make for a great snack… they also would be good in soup, as an “appetizer”, in a cheese plate, as croutons in a salad… I mean, the possibilites are endless!

I love eating them with this carrot hummus.

We need more grain-free, non-processed, healthy crackers in our lives, if you ask me.

Let me know if you try them and how you ate them!

Other healthy Paleo snacks you may enjoy!

These Paleo Cheese Crackers from Tessa the Domestic Diva sound and look just amazing! Crispy crackers for the win!

Video showing how to make these Paleo Everything Almond Crackers: 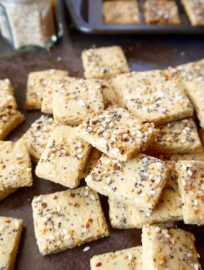