I’ve been tasting, trying, and comparing different caesar salad dressings for the past few weeks now. My taste buds have been searching for the key to the distinct tangy flavor of caesar salad dressing. I thought that I’d figure it out rigghhht quick, but then I realized that maybe there is no “key”…

Despite the garlicy, lemony, and creamy flavors that unite most caesar salad dressings, they can still all taste SO different.

Traditionally, anchovy paste is used in making caesar salad dressing. But I didn’t really want to use anchovy paste in mine. I know I should be more adventurous, and I’m not totally opposed to trying it.

But I really wanted to figure out an easy way to make paleo caesar salad dressing at home, with ingredients that I normally have on hand.

So, I played around with some recipes. I found that the key to the flavor, for me, can be found in the dijon mustard, lemon, and garlic. I personally like the extra tang that 3 tsp of minced garlic results in. But you may want to use 2 tsp if that’s too much for you. 🙂

I also tried making this dressing with coconut milk and mixing it with a food processor. This resulted in a more liquidy, smoother version of the dressing. Like so.

Both taste great, but I have to say that I liked the thicker dressing made of coconut cream.

I personally don’t think that the manner in which it is mixed (handheld electric mixer vs. food processor) made that big of a difference. Especially when you’re eating the caesar dressing with other foods.

Or in a simple kale salad. Which is an amazing way to eat kale, if I do say so myself.

Now, I don’t know if my taste buds have been burned by all the raw garlic involved in the process of recipe developing… but I think that this dressing is delicious. 🙂

I decided to call it Paleo Caesar Salad-like Dressing because it tastes so much like caesar salad to me and yet it has it’s own unique taste to it. You’ll see what I mean.

Let me know what you think, if you suggest anchovy paste, or how you make paleo caesar dressing at home! 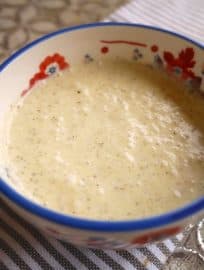