This dressing tastes exactly like the sauce my mother makes and my grandmother used to make for dipping artichoke leaves into, and it is wonderful on salads or on any cooked veggie.

Have you tried eating boiled/steamed artichokes and then dunking the leaves into a lemony creamy dressing? It’s really quite nice, and light.

To be honest, I didn’t even mean to make a dressing that tasted like this. I was actually inspired by a Marks and Spencer salad dressing that I ate, which was made of egg yolk, cream, lemon and turmeric inside.

I was intrigued about making a mayonnaise based dressing (with the egg yolk) and decided to try to recreate a Paleo version of it… and found myself with this Lemony Turmeric & Pepper Egg Yolk Dressing.

I was pleasantly surprised because I had not tasted this flavor in years! I practically forgot about it until I made this.

I love when a smell or taste reminds you of good memories. 🙂

And for me, this dressing jogged up fond memories of visiting my grandparents in France… and the smell of their garden… their 7 cherry trees… their raspberry bushes…their bee hives and gardens… and how we would move the dinner table outside and eat in the garden.

I distinctly remember eating artichokes outside in the fresh summer air and loving the dressing more than the artichoke itself… I heavily coated each artichoke leaf so that I could reeeaaaally taste the dressing! haha

Well this Lemony Turmeric & Pepper Egg Yolk Dressing has me doing much of the same. I have used it on countless salads, covered boiled carrots in it, and dunked tomatoes, cucumbers, and peppers into it.

I love that it has turmeric in it, as I have been using any excuse to incorporate it into my diet. And I also love that the texture of this dressing is moussy yet creamy.

The flavor is tangy from the lemon, mustard, and apple cider vinegar, yet creamy from it’s base of homemade mayo and the added coconut milk.

It’s really quite delicious and multipurpose, and the recipe is right in time for summer. 🙂 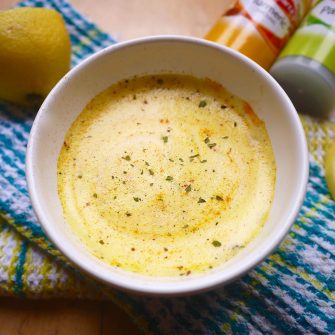