I’m interrupting the cranberry chronicles to bring you this Creamy Broccoli, Cauliflower, and Chicken Soup (Paleo, GF) recipe. I originally had another cranberry recipe that I planned to post, but then it got really cold outside. And then I got a craving for broccoli soup. Around the same time, I walked by a Chinese grocery store and found coconut cream (without any preservatives)! (major Yay!) Which I saw to be a sign that I needed to make a Paleo broccoli soup ASAP.

So I brainstormed and then I bought some broccoli and cauliflower at the grocery store… and also some chicken and carrots for good measure. And a few hours later, this thick, creamy, and flavorful soup was born. 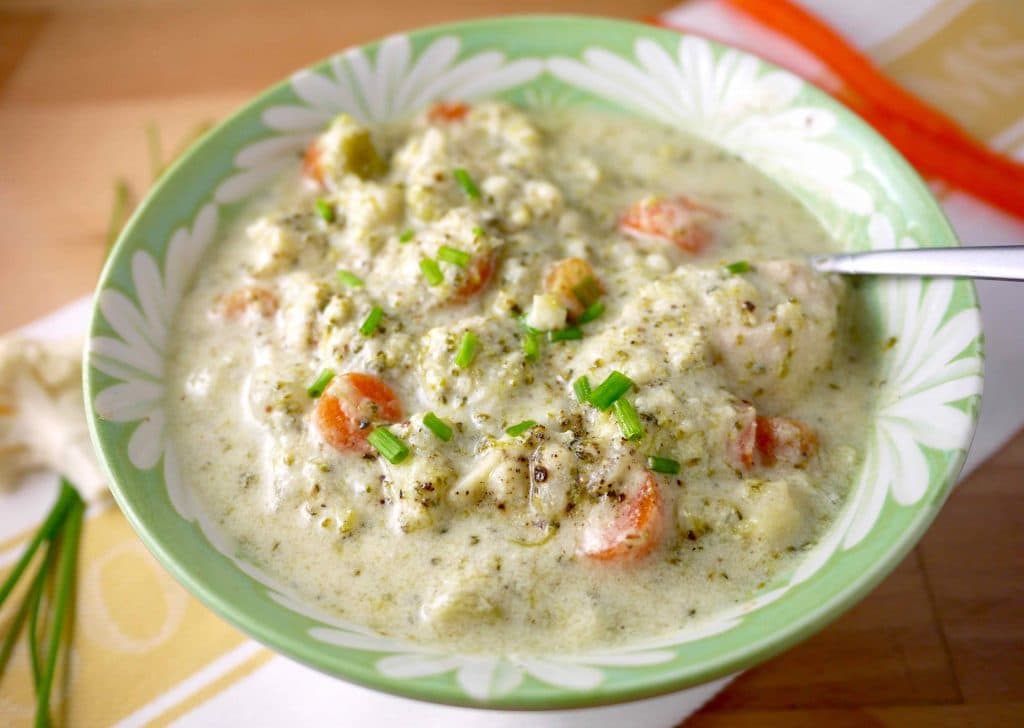 I feel like I need to explain my excitement for finding coconut cream.

I recently moved to Northern Ireland and all of my regular go-to paleo products that I was used to using were not as easy to find as I had hoped.

I’m pretty picky when it comes to coconut milk and coconut cream, as I do not want to use any with preservatives in it. I find it tastes bad and defeats the purpose of using it.

I had found coconut milk that I liked here, but had really been missing the creamy texture and amazingness of coconut cream. Plus, I can’t really imagine making a creamy paleo soup without it!

So, when I found coconut cream (Arroy D) at the store, it was the highlight of my day! 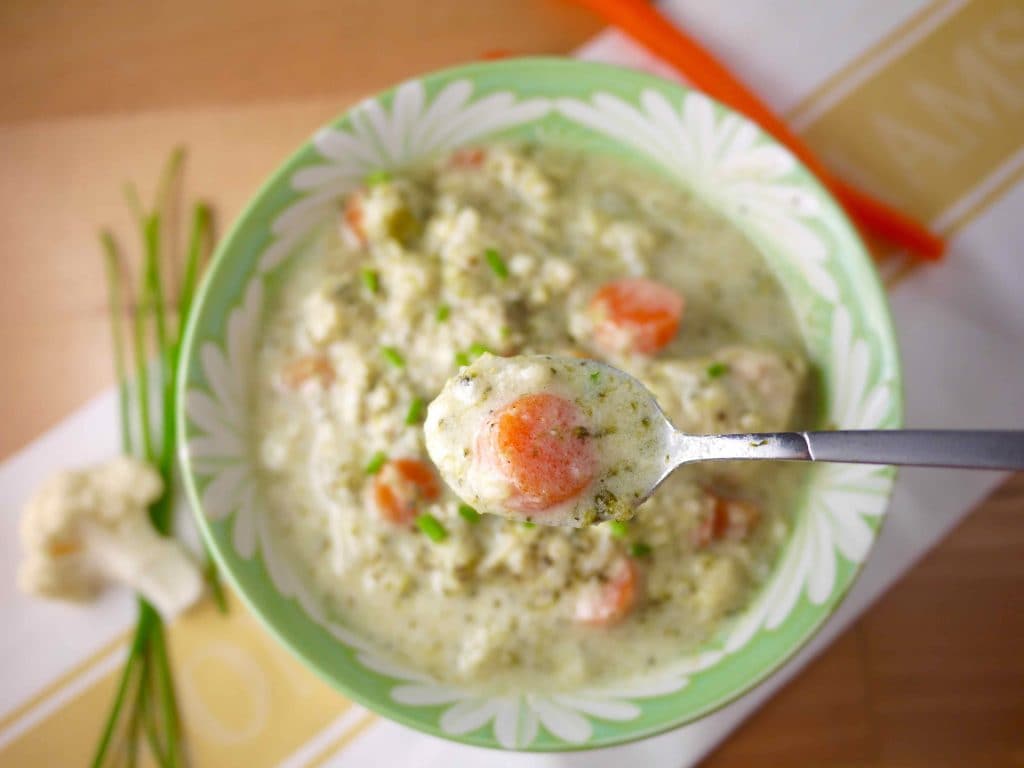 I didn’t really know how I’d go about making this broccoli soup, but I did know that I wanted it to have a bit of sweetness to it.

Which you get from the cauliflower. I wouldn’t actually say it is sweet, per say, but there is a satisfying creamy sweetness to cauliflower. Maybe it is just me.

And I figured protein would be good, which is where the chicken comes in. 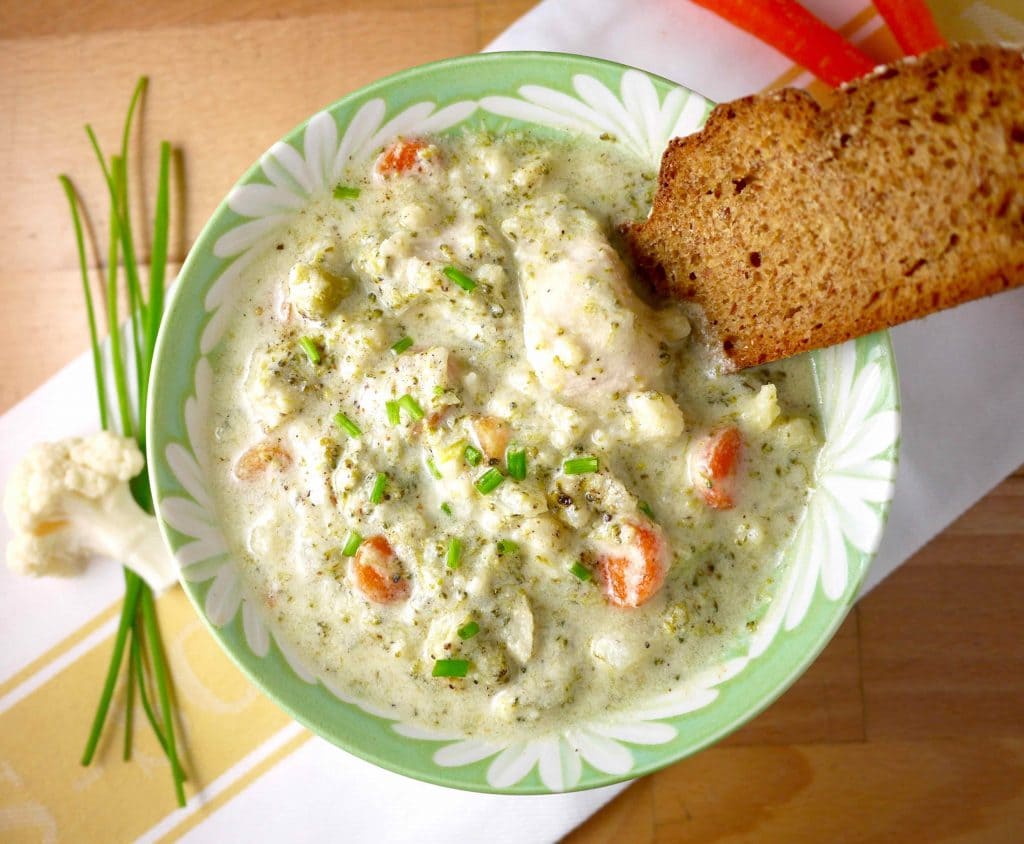 So I just put 2 bouillon cubes into 3 cups of water. Either option would work.

And to start everything off, I boiled the cauliflower and broccoli in water to soften them.

I didn’t want to blend the broccoli and cauliflower, because I like thicker, chunkier soup. 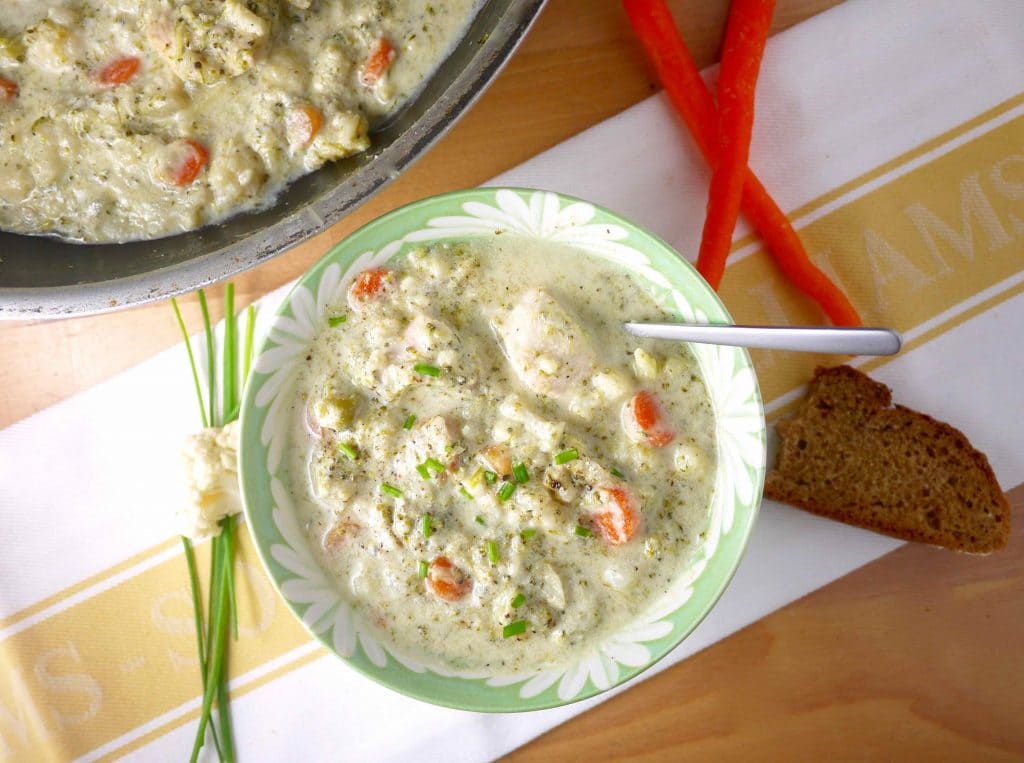 Which is why this soup is so great. Also, the flavors of the coconut cream, cauliflower, broccoli, chicken, and carrots, couldn’t have melded together better.

The onions and garlic are key here too because I think they add make the coconut cream taste more like real cream, if that makes sense.

Anyways, if you want a warm, satisfying, soup, I highly recommend this one! 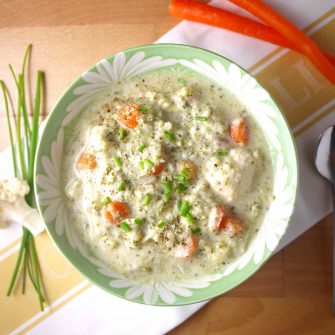