Toasted Coconut Cream Cake recipe. A delicious grain-free, Paleo, Gluten-free, dairy-free coconut cake recipe full of toasted coconut inside and out! It is made with almond flour, arrowroot flour, and coconut flour and is topped in a coconut cream frosting.

I’ve been really feeling the Easter holiday lately. I’m not sure if it’s all the bunnies around the house, the bright colors all around me, all the Easter candy in the stores, or all the Easter recipes on Pinterest… but I’m super excited about it all.

I personally love all the coconut and cream flavored desserts this time of year, especially topped with little candy eggs.

If you love them too, then this Toasted Coconut Cream Cake is a great Paleo, gluten-free, grain-free, dairy-free cake option that tastes just as good, if not better than the original.

Seriously, this Toasted Coconut Cream Cake is SO good. It’s light and fluffy and full of naturally sweetened toasted coconut. The cake here is made with a combination of almond flour, arrowroot flour, and coconut flour.

Once it is baked, and has cooled down, it’s topped with a whipped coconut cream and some more toasted coconut.

This recipe is seriously delightful and perfect for Easter or Spring in general.

It is important to like the taste of both your coconut milk and cream in this recipe. I have a hard time finding ones that don’t taste like sunscreen to me. My go-to brands are Golden Star coconut milk and Savoy coconut cream.

How to make this toasted coconut cake:

To do this mix some unsweetened shredded coconut with maple syrup and cook until browned and toasty.

I find that toasting coconut really brings out it’s flavor in a healthier way.

What I mean by that is that coconut tastes a bit better when it has sweetness added to it. At least I think it does.

Which is why they make  sweetened shredded coconut, with lots of added sugar. It tastes super yummy, buuuut it’s got way too much added crap in it.

Toasting unsweetened coconut with a wee bit of maple syrup really brings out a delicious coconut flavor, but without any added sugar, preservatives or chemicals.

(seriously, check out the ingredient list of sweetened coconut and you’ll find a whole lot of stuff thats hard to pronounce in there… so unnecessary!)

In another bowl, mix the eggs, honey, vanilla, coconut milk and apple sauce together.

Then mix the dry and wet ingredients together.

Can we talk about how some of the toasted coconut is inside the batter?! YUM

After that, you pour the batter into a cake pan and bake!

To do this, it is always best to put a can of coconut cream into the fridge overnight.

Then, put the top hard part of the cream from the can into a bowl. Add honey and vanilla and mix with an electric mixer until the coconut cream mixture thickens and turns into a whipped cream.

I love that this coconut whipped cream doesn’t have any preservatives, and is flavored with a little bit of honey, and vanilla.

Firstly, you cover the cake in coconut whipped cream.

Then, some toasted coconut goes on top of the frosting.

I couldn’t help myself and had to add some mini cadburry eggs on top of the cake, which is NOT Paleo, but it’s festive.

Can someone PLEASE make a Paleo version of these eggs?

Or if one exists, and I’ve been totally missing out, I’d love to hear about it!

Healthier coconut desserts you may enjoy:

Check out this No Bake Coconut Cream Pie by Salted Plains for a yummy healthier dairy-free option. It is just beautiful!

This Healthier Coconut Cream Tiramisu is my favorite tiramisu of all time. It is made with coconut cream instead of heavy cream and is SOO good. 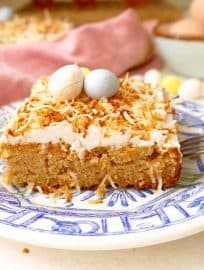