My boyfriend and I recently bought tickets to Massachusetts to visit his family and go apple picking. I’ve never gone apple picking, so I’m excited to go and to taste fresh picked apples!

Ever since our tickets were booked, I’ve had apples on the brain. I had the idea to make an “apple sauce” cake and quickly put some ingredients together and put it in the oven.

While this cake was in the oven, I started researching “applesauce cake” and found that this was already a thing. I wasn’t too surprised, this isn’t that original of an idea, but what was even more interesting was that this is an Amish recipe.

This cake is different than the recipes that I found though.

For one, it’s grainfree/paleo/non-processed...aka there is no refined sugar or flour.

It’s also different in that I added sliced apples vertically into the batter. This was inspired by a cake recipe that I learned when I was younger.

My aunt taught me a recipe for a cake called “Madame Marshall”, which is a French cake that has apple slices vertically placed into the batter. It is so delicious.

I also searched for this online while this was baking (I did have about an hour to wait while it cooked) and could not find anything about it! Nothing!

Which makes me wonder if Madame Marshall cake is really a known recipe or if it’s just regional or personal recipe. It’s all a mystery! haha

Either way, it is delicious and I wanted to put the apples in a similar fashion for this cake.

Which had an interesting result. It was great having the apple slices compliment the apple batter.

But you need to carefully place them in such a fashion that you can cut slices of cake in between the rows of apples.

Once the cake was sliced, I cut the cake into squares.

This Applesauce Cake is a pleasant fall treat, full of apples, nutmeg, and cinnamon.

I brought some to a labor day party.

A guest at the party tried it and asked what it was, so I explained that it was a paleo applesauce cake.

He asked what this meant and so I went on a whole tangent about there not being any flour or sugar in the recipe and how it is made of all natural, non-processed ingredients.

I think he may have tuned out a little, but once he tasted it, he said, “Wow, if this is Paleo, I’m going Paleo!” 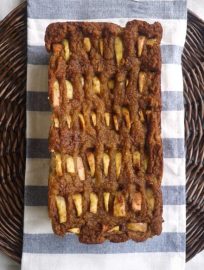 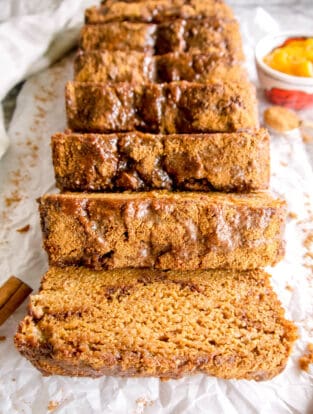