This Paleo Snickerdoodles recipe will be my last cookie or baked goods recipe for a little while. I’m going to do a Whole 30 starting this weekend and don’t want to tempt myself anymore than need be.

So, I will enjoy these delicious almond flour snickerdoodles of pillowy cinnamon grain-free cookies while I can.

I actually made several versions of Paleo Snickerdoodles before choosing one to post.

This almond flour snickerdoodles recipe is my personal favorite. I love how they taste warm, and I love the fluffy texture of them. They are a bit fragile, as they have a cracked surface, but snickerdoodles are meant to have some cracks in them.

The runner up recipe, was more smooth in texture, and had more of an almondy taste. My brother-in-law and my mother preferred the runner up almond version… in fact, they really liked them.

How to make grain-free snickerdoodles:

In a large bowl, whisk together the honey and maple syrup. Add the coconut oil and whisk again. Then add the apple cider vinegar and the egg, and whisk until the mixture thickens.

Then in another bowl, mix the baking soda, almond flour, coconut flour, cinnamon and salt together.

In a small bowl, mix coconut sugar with cinnamon.

Then scoop up 1 Tablespoon worth of dough and roll the dough into balls and dunk them into the coconut sugar mixture. Place them on the cookie sheet and flatten a bit.

The difference between both versions of these coconut flour snickerdoodles:

I had mentioned earlier that I made two different versions of this cookie. Version 1 is this recipe and Version 2 was more almondy in taste.

The recipe that I posted ( in the recipe card below) was the clear winner to me, but to my brother and mother loved the runner up recipe. So I’ll provide a quick blurb on how to make them.

To make the almondy runner up (version 2) paleo snickerdoodle recipe, follow the recipe below BUT don’t use any coconut flour. Instead change your almond flour to 2 cups, add 2 Tbs of arrowroot powder, and add 1 Tbs of vanilla. Follow the rest of the recipe as the one posted below, just cook them for a few minutes longer.

As I mentioned, this gluten-free snickerdoodles almond flour recipe is my favorite. From the fluffy thicker texture, to the taste… yum yum yum! My sister and my friend preferred it as well. Even my 19 month old nephew liked them!

I think I’ve always been partial to mixing almond flour and coconut flour together with baking. So that may be part of it.

I guess it just goes to show you how different people’s preferences and taste buds can be.

These Gluten-free Snickerdoodles from This Vivacious Life. They are soft and chewy and look so perfect!

These Soft Paleo Pumpkin Molasses Cookies (GF) have the best spice! Full of cinnamon, pumpkin, and molasses, and made without refined flours, sugars or dairy. 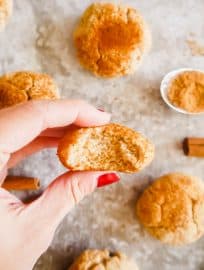