Zucchini, Spinach, Meat and Rice Stuffed Peppers recipe. A naturally Gluten-free and flavorful dish made of a ground beef and ground turkey meat sauce with spinach, zucchini, and rice… that is stuffed into bell peppers and baked until the flavors have melted together.

It’s cozy comfort food season! One of my favorite comfort food meals is stuffed peppers. And currently it is this this Zucchini, Spinach, Meat and Rice Stuffed Peppers recipe.

It’s a naturally Gluten-free and flavorful dish that is composed of a ground beef and ground turkey meat sauce with spinach, zucchini, and rice added to it.

Then, this meat, veggie, and rice mixture is added to hollowed out bell peppers and is cooked until the peppers have softened and all of the flavors have practically melted together.

Comfort food season is seriously the best. I love all the soups, casseroles and savory pies this time of year. I mean, look at this Gluten-free Chicken Pot Pie from Gluten Free Palate. DROOL.

Stuffed Peppers are high up on my comfort food list. I make stuffed peppers pretty regularly and have found that these Zucchini, Spinach, Meat and Rice Stuffed Peppers always hit the spot.

Normally, I just make my standard meat sauce recipe and add that to stuffed peppers, but I was recently in the mood for something different.

So I seasoned the meat sauce with paprika, basil and oregano. Then I added zucchini, spinach and cherry tomatoes to the meat sauce. I also added cooked white rice as well.

Then I stuffed 6 bell peppers with the yummy veggie, meat and rice mixture. I poured the remainder of the mixture around the bell peppers and put it all into the oven.

These Zucchini, Spinach, Meat and Rice Stuffed Peppers are my kind of meal… filling, warm, healthy, and delicious. They are seriously the ultimate cozy comfort food.

The spinach adds a enjoyable flavor to the overall dish and the zucchini adds a delicious green crunch.

The cherry tomatoes add a pop of extra tomato flavor. Literally, they pop delicious fresh tomato flavor into each bite. Which I love!

And the rice adds a satisfying touch to the overall dish, which really makes the dish feel like a complete meal.

I love that there is extra of the meat, veggie, and rice mixture that surrounds the stuffed peppers because I like to serve each pepper with a large spoonful of this mixture.

That extra bit keeps me from eating another stuffed pepper and it leaves more for leftovers!

I also like to add a sprinkle of maple sugar or coconut sugar on top of these Zucchini, Spinach, Meat and Rice Stuffed Peppers when I serve them.

The sweetness of the sugar balances out the acidity of the tomato sauce and really enriches the whole flavor combination to me.

One of my favorite things about this dish, aside for how yummy it is, is that it makes wonderful leftovers! My husband and I have lunch for several days in a row when I make this recipe.

This dish reheats really well. It gives me a break from cooking for the week, which is always welcome with a 4 month old in the house. 🙂

Now, there is one thing that I need to add. If you don’t like bell peppers, you can make this dish with tomatoes instead and make stuffed tomatoes.

All you have to do is skip the part where you cook the peppers before stuffing them, and just stuff the tomatoes raw and then cook them.

Hope you like this recipe as much as I do! 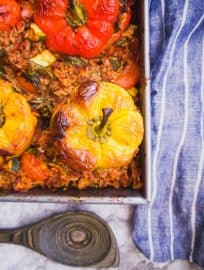 Servings: 6 people
Prep Time: 35 minutes
Cook Time: 1 hour 5 minutes
Total Time: 1 hour 40 minutes
A naturally Gluten-free and flavorful dish made of a ground beef and ground turkey meat sauce with spinach, zucchini, and rice… that is stuffed into bell peppers and baked until the flavors have melted together.