Each bite of these Fudgy Chocolate Chunk Brownies melts in your mouth…in the way that only the best Paleo brownies can.

In fact, they are so delicious, that you’d never guess that they were naturally dairy-free, grain-free, gluten-free, and Paleo-friendly!

These olive oil chocolate brownies are made with healthier ingredients like almond flour, olive oil, and coconut sugar, and taste just as amazing as regular brownies.

If you love gooey brownies, then this gluten-free brownies with almond flour recipe is for you!

These double chocolate paleo brownies taste like the gooey middle part of brownies that we all love.

Except, the whole pan is the gooey middle part!

I’m serious… you would never know that these healthy almond flour brownies are made with healthier-for-you ingredients!

Only 9 ingredients are needed to make these double chocolate paleo brownies… NOM.

I know I keep saying these are fudgy… but I just want to make the point clear. When I say fudge, I mean fuuuuudge.

These gluten-free brownies with almond flour are not cakey brownies…( though if you like cakey brownies, check out these Paleo Almond Butter And Jelly Brownies, SO good. )

To ensure that these come out fudgy, make sure not to overbake them! 22 minutes was perfect for me.

However, if you take your finger and touch the “wet” looking center, you’ll see that it actually isn’t wet. It may feel sticky, but it should be hardened.

That’s when you know the brownies are done.

The texture of these brownies is meant to be permanently gooey and fudgy.

Confession: I often don’t wait that long, but they do come out better if you wait.

If you wait, then they are easier to cut, and have more structure. Which makes eating fudgy brownies easier.

Sometimes brownies are fudgy because they are warm, these are fudgy whether warm or not.

Also, the tops of these brownies eventually crisp and harden… which makes them almost better the next day!

They get so melty, which adds to the gooeyness factor of these olive oil chocolate brownies.

How to serve these Olive Oil Brownies:

I love serving them a bit warm with olive oil!

Or I like adding fresh raspberries to a square of these gluten-free brownies with almond flour and eating it with some coffee on the side. Raspberries and chocolate go SO well together.

I also love sprinkling sea salt on top because then it really makes them the best Paleo brownies!

I think these make an excellent afternoon snack or dessert. NOM

Other Gluten-free brownie recipes you may be interested in:

Check out these Gluten-free brownies from Flippin’ Delicious; they look so good!

Take a peek at these Gluten-free Brownies from Texanerin. They look so incredibly fudgy!

These Perfect Keto Brownies from Cassidy’s Craveable Creations. They have a wonderful looking crackly crust and fudgy center. NOM. 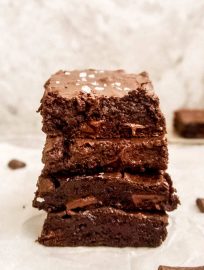