Cherry season is the absolute best. I have been putting cherries IN and ON practically everything! And because of that, I have quite a few new recipes to show for it. 🙂

Like this Fresh Cherry Grain-free Granola recipe. It has quickly become my new favorite way to make granola because it involves using FRESH cherries. That’s right. There is no dried fruit in this granola!

I am super excited about the role of fresh cherries in this recipe!

Why? Well normally, dried fruit is added to granola part way through baking… but I find that this actually make dried fruit even harder… so you end up biting hard pieces that make you think you just chipped your tooth!

Like why would I want to eat a hard raisin? haha

And sometimes dried fruit can be added after the rest of the granola has baked but this reminds me more of muesli and less of granola.

How to make this Fresh Cherry Grain-free Granola:

I pitted a bunch of beautiful summer cherries and put them into a food processor. I made a puree of sorts, but it was still a bit chunky, with some larger pieces.

Then I mixed the pureed cherries with honey, olive oil and vanilla and heated it up on the stove for about a minute.

After that, I mixed the cherry mixture into a big bowl of shredded coconut, sliced almonds, pumpkin seeds, chia seeds, hemp seeds, almond flour, and cinnamon.

Soooo much goodness in a bowl!

At 30 minutes you might think this granola isn’t done yet, because it’s still a bit wet/damp. But do not worry. If you mix it and then leave it out for 10 minutes everything hardens so well!

I made the mistake of thinking that this granola needed more time to bake and then cooking it for an extra 10 minutes and this realllllllllly toasted the granola. Too much for me, though I had some test tasters say they liked it toasted.

So if after the 10 minute waiting period, you decide you want to toast it more, go for it. 🙂

Anyways, once the granola hardens, you’ll notice that the chunks of cherries in the granola have turned into dried fruit. But it’s not hard, it’s actually quite soft!

And the cherry juices infuse into the rest of the granola, giving a nice subtle cherry taste to everything.

It’s soooo yummy and soooo perfect for cherry season. Well, it’s perfect for summer really because I kind of think everything should have a nice subtle cherry taste to it in the summer.

How else would you know it’s summer?! (Besides the weather haha)

I’ve been adding almond milk to this Fresh Cherry Grain-free Granola and eating it for breakfast.

It also tastes ridiculously good on top of ice-cream or yogurt.

Hope you guys love it! Let me know how it turns out for you. 🙂

Other granola recipes you may enjoy: 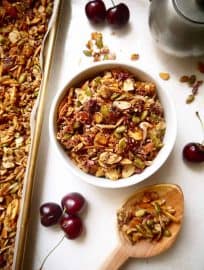