I’m all about the spiralized potato lately. Spiralized potatoes bake really well, and when a creamy sauce is added they absorb and compliment the sauce in a way that makes you forget all about pasta. True story.

This certainly is the case with this Cajun Shrimp and Spiralized Potato Casserole recipe. It’s a yummy Paleo, Whole30 compliant, and grain-free dish made with spiralized potatoes, cooked red peppers and tomatoes, creamy coconut cream, and protein-rich shrimp. It’s also seasoned with a homemade cajun seasoning, which adds a nice heat to the whole casserole.

I was inspired to make this Cajun Shrimp and Spiralized Potato Casserole by two things.

The second was eating at a New Orleans style restaurant a few weeks ago.

You see, I used to live in New Orleans… about 4-5 years ago. I thoroughly enjoyed the 3 years that I lived there and really fell in love with the abundance of heart and uniqueness to the culture there.

The architecture, the food, the history, the people… New Orleans is really a one of a kind place.

Outside of Charleston, I haven’t been to another US city that felt as European as New Orleans does.

If only it was a safer place to live, sigh. However, that is for a whole OTHER conversation for another day.

Anyways, I tried a cajun pasta dish at this New Orleans themed restaurant and forgot about how I had forgotten about cajun seasoning.

Does that make sense? haha

I instantly thought about how I could add this seasoning to a creamy spiralized potato dish and got to recipe testing.

Spiralized potatoes retain their shape and texture better than zoodles, which works better for a baked casserole. Though zoodles are delish, and I’m clearly a huge fan (from all the zoodle recipes in my recipe index).

So for this Cajun Shrimp and Spiralized Potato Casserole dish, I made a homemade cajun seasoning.

For me, this seasoning and this dish was spicy, but my brother didn’t think so, so it’s all about what you are used to. Add more or less to this dish, as your taste buds prefer.

I basically used this cajun seasoning throughout the dish, starting with seasoning the spiralized potatoes with it before baking them.

Then, I cooked the onions, garlic, red peppers and tomatoes together. I added coconut cream and more cajun seasoning to make a delicious sauce.

I poured this sauce on top of the spiralzied potatoes, mixed and baked the casserole some more.

After that, I seasoned the shrimp with more cajun seasoning and then added it to the casserole and baked it for a final 12-15 minutes.

It’s a super flavorful and satisfying dish. Keep in mind to use more/less seasoning to your liking. 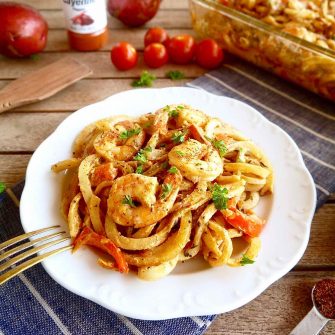