My friends and I threw a baby shower for our good friend who is having twin girls. How exciting is that?! Every time that I thought of her shower, I had the vision of chocolate covered cookie dough balls that were pink. I wasn’t exactly sure how to make this come together because I had never made anything like it before… so I bought lots of extra materials (tooth picks, bigger picks, different white chocolate brands, chocolate chips…etc).

After a few hard lessons learned (melting white chocolate is so hard to do!), the end result was delicious! I mean, how can white chocolate covered cookie dough bites not be delicious?! I was approached by a friend at the shower and told that I had to try the cookie dough bites because they were so good that she wanted to steal them all. Little did she know that I was the one that made them. 🙂 So I decided that I had to share this recipe! 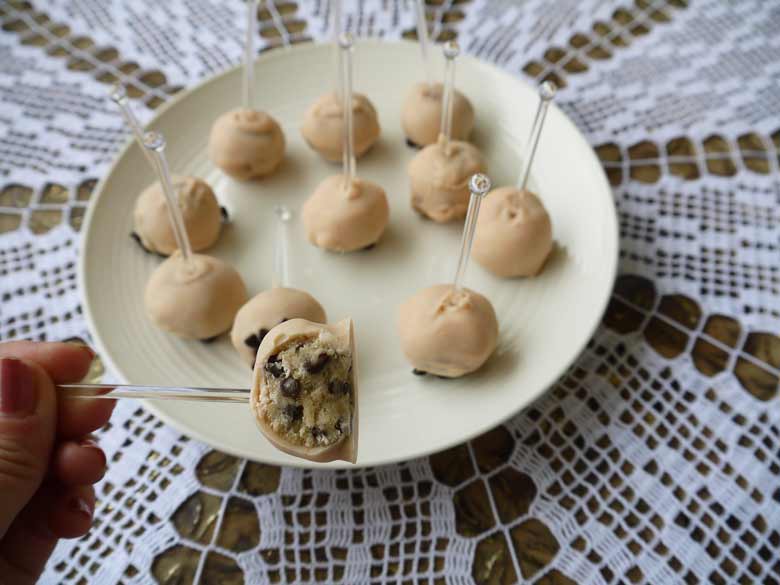 The key here was using a cookie recipe that I have saved in my cookbook as “Forget The Cookies, Just Give Me The Batter”. I think the recipe came from some kid’s cookbook that I used to own. The baked cookies aren’t anything special, but the cookie dough is amazing! I removed the eggs and baking soda from the recipe and kept everything else the same. 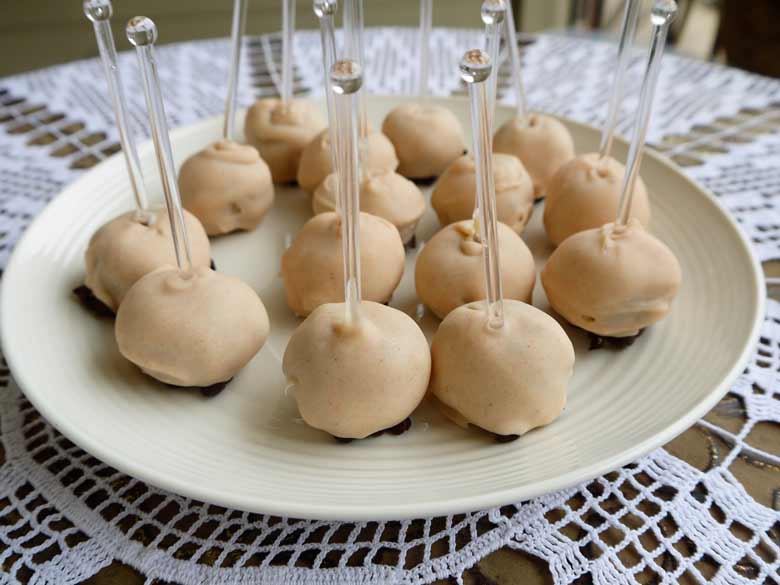 One important thing to remember is to make sure that the sugar is totally melted into the butter so that the cookie dough balls harden without being grainy. Once the dough was mixed, I put it in the fridge for thirty minutes. 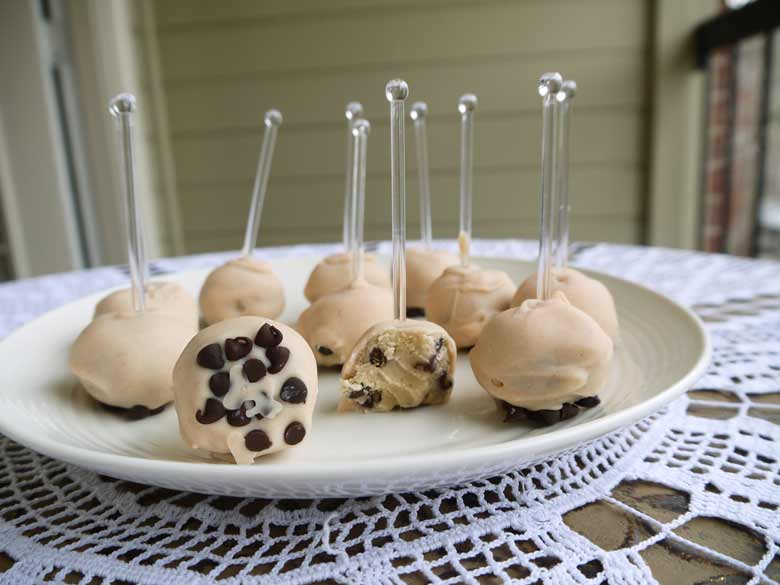 I then scooped out 1 tbs sized amounts of the dough and rolled them into round balls with my hands and placed them on a plate. I then put a regular toothpick in the middle of each ball and put them back in the fridge for another thirty minutes.

In the meantime, I melted the white chocolate. Which turns out to be much harder to do than expected because it burns much more quickly than dark chocolate. And by burn, I mean that it hardens into white clumps and won’t soften or melt enough to dunk anything into. I ended up having to throw away two packs of white chocolate! 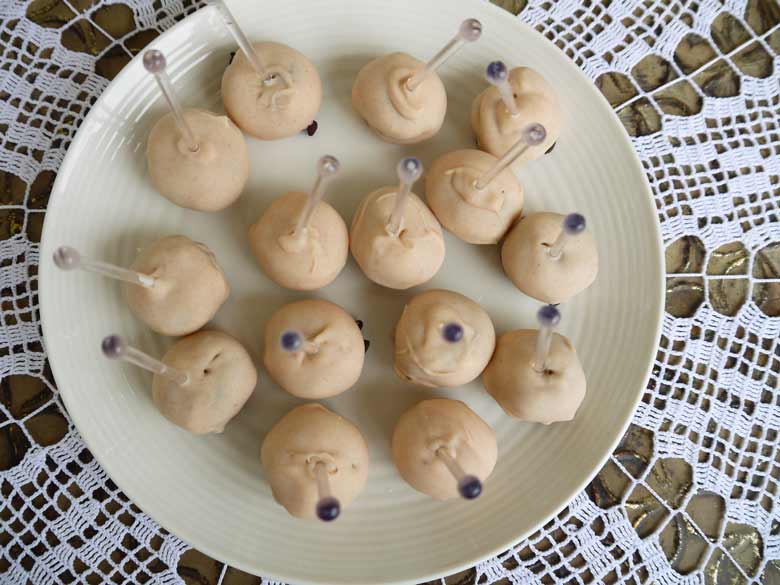 But I finally learned the key to melting white chocolate. You put the chocolate, butter and red dye into a thick plastic bowl and place that bowl over a pot of water over medium heat. For regular dark chocolate, you would put it into a bowl over a pot of boiling hot water, but that is too hot here. You have to make sure that the stove is on medium, the water isn’t boiling, and that you remove the chocolate from heat to mix it every once in a while.

Once the white chocolate is melted and pink, set the chocolate aside until room temperature. I removed the hardened cookie dough balls from the fridge and dipped them one at a time into the chocolate. The regular toothpicks were not sturdy enough to hold them, so luckily I bought the bigger clear ones that you see in these photos. I dunked the cookie dough balls into the chocolate, and carefully spun them around to let the excess chocolate drip off. I also used a toothpick to wipe off the excess chocolate. If the pick fell out easily from the ball, I dunked it into white chocolate and put it back in the whole and let it harden that way. 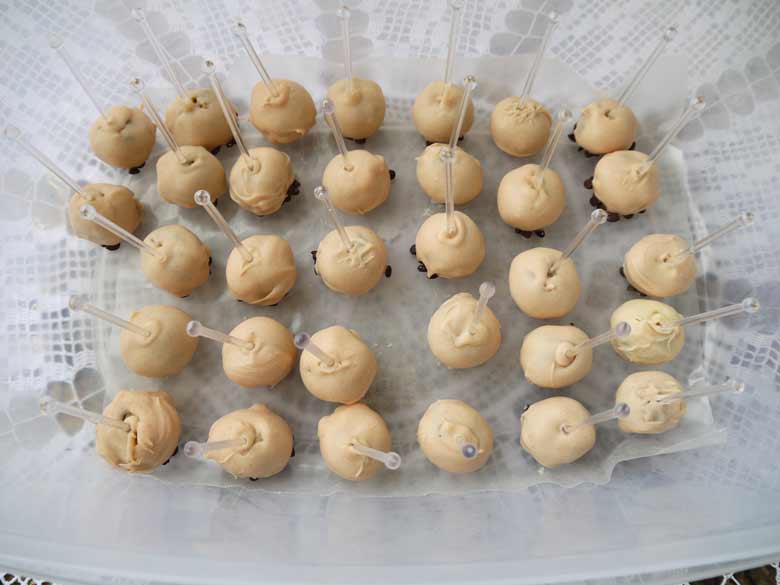 While the chocolate was still wet, I then dunked the bottom of the chocolate covered cookie dough ball into a small amount of chocolate chips before placing the finished product onto wax paper. 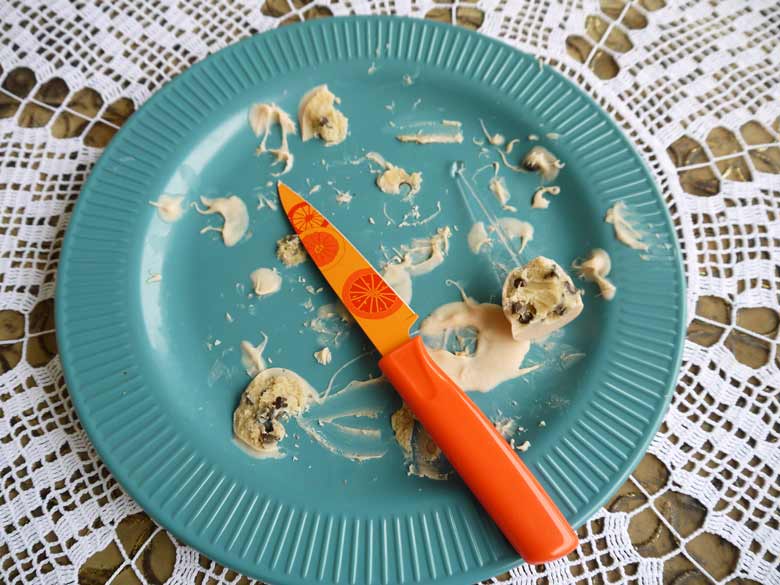 Hard lesson number two was making the chocolate covered cookie dough balls without chocolate chips on the bottom, which made them stick to the wax paper or plate. But with chocolate chips, they dried out perfectly. This whole process is messy, but totally worth it!

The finished product can keep in the fridge until you are about to serve them. I made them the day before the baby shower.

One more thing, my friend that is having the twins has a great twins blog called TwinGemsBlog, you should check it out! 🙂 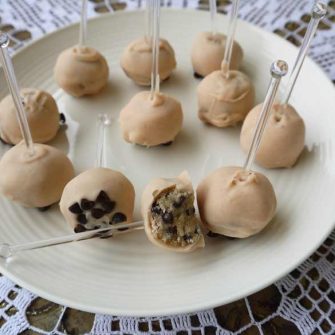