I am in love with the Pesto flavor of this spaghetti squash bowl! Crushed pine nuts, fresh basil, and dried goat cheddar make a wonderful paleo-friendly sauce, if I do say so myself.

Add this pesto to some spaghetti squash, onion garlic chicken, and some roasted zucchini and you’ve got a delicious “pasta” bowl full of vegetables and protein at your fingertips.

I wanted to quickly clarify why I labeled this meal “paleo-friendly.”

Goat cheese is not strict Paleo (everything else in this recipe is though!). Some consider goat cheese primal. And many like goat milk products because they are easier to digest.

At the end of the day, you just have to listen to your body and follow the best diet for you.

I consider the occasional goat cheese to be a part of my Paleo diet and consider this meal to be “paleo”, but I know that not everyone does, hence the paleo-friendly label.

If you want more info on what is or isn’t Paleo, I really like Eat Drink Paleo’s “Paleo Food List”  and her approach to a healthy lifestyle.

Anyways, back to the recipe! And just a warning, this is a step-by-step post– so if you are looking for the recipe, just scroll down.

But if you love food photos as much as I do or if you want to make sure it looks right as you make it…. enjoy the plethora of pictures! 🙂

To start, I cut the spaghetti squash in half, removed the insides, coated it with some olive oil, and placed it face down on some aluminum foil.

Then I put it into the oven and let it cook for 40 minutes.

Then, I put some goat cheddar and pinenuts into a food processor and mixed them until it was all ground up.

(I’ve also made this with parmesan and it was amazing, the choice of cheese is yours, :P)

Next, I added a large handful of fresh basil and some olive oil to the food processor and mixed it until smooth.

At this point the pesto is done and can be set aside.

Then, I minced some onion and garlic, cooked them until transparent and added the chicken to the pan.

I cooked the chicken until it was nice and golden. 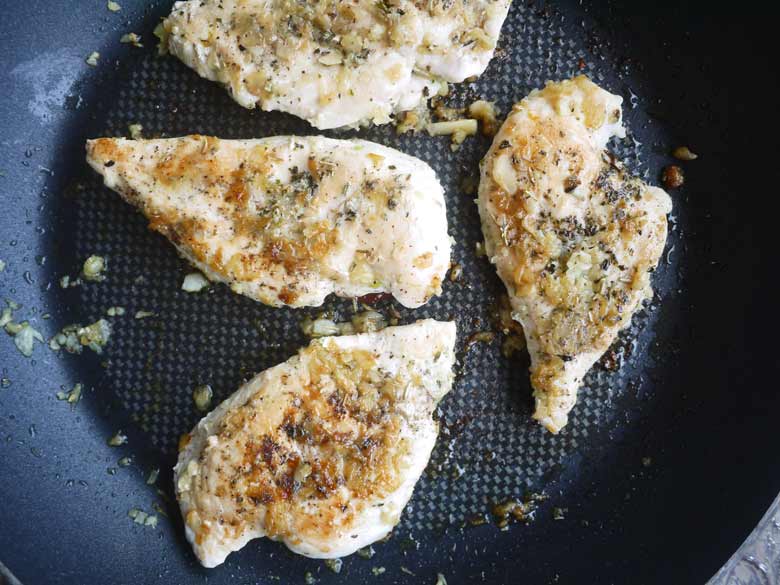 Then I cut the chicken into bite sized pieces and set them aside.

After that, I sliced the zucchini, halved each slice, and roasted them until they were soft.

By this point, the spaghetti squash was done and so I took two forks and used them to rake against the inside of the squash, until the insides looked like “spaghetti”.

Once I raked up all the spaghetti squash, I put the “spaghetti” into a large bowl and mixed the pesto into it.

Since it was still warm, it all melted into each other. Um– yum!! 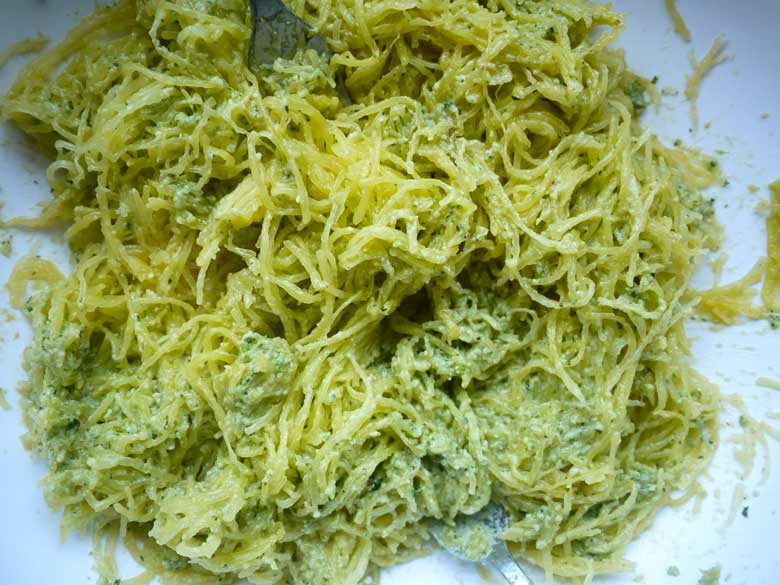 Then to finish it up, I tossed the chicken and zucchini into the pesto spaghetti squash.

I added some pinenuts, fresh basil, and salt to the bowl and gave it one final toss before serving the Pesto Spaghetti Squash, Chicken and Zucchini Bowls.

These bowls are a wonderful paleo/paleo-friendly meal— they are crunchy, flavorful, and filling.

They are also husband/fiancé/boyfriend approved (my fiancé ate three bowls of it!). 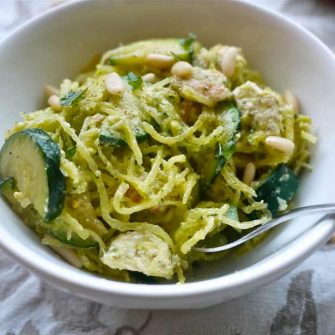