In this recipe, sweet pears are cooked to caramelized perfection, and are then mixed into a dark chocolate chip cake batter (made with almond flour and coconut flour) and cooked until the smell makes it too hard to wait any longer…

I mean, chocolate and pears… is there a better combination?!

I think this might be my new favorite paleo grain-free loaf recipe, and I didn’t even mean to make it!

Why is it that sometimes your best recipes are the ones that weren’t planned?

That certainly was the case here as my only plan was to cook three small pears that were looking a bit sad on the kitchen counter.

I mixed the diced pears with some nutmeg and cinnamon and let them simmer.

However, as they cooked, they started to caramelize.

A beautiful brown caramel started to form on the sides, and the smell of caramelized pears filled my kitchen and inspired me to put them into something… should it be cookies? Or brownies?? No… a cake!

I wasn’t really sure what direction I’d go, but I was “in the zone” of baking creativity so I just went with it.

I looked to my chocolate chip banana bread recipe as inspiration and I took out one banana and the coconut oil and used olive oil instead. Olive oil just seemed to go better with pears. I mean, have you ever had pears in a salad? Enough said.

I folded some chocolate chips into the batter. I used Enjoy Life, but have recently been told that there is a fully Paleo chocolate out there called Zimt! I’m excited to try it.

Then I folded in the caramelized pears, put the batter into a loaf tin, and topped it with some diced pears.

And then, I waited. The smell of this Paleo Caramelized Pear and Chocolate Chip Loaf Cake cooking was divine. If I didn’t know better, I’d think that caramel was cooking on the stove top.

I had to take mine out of the oven at 31 minutes, but my stove cooks way more quickly and powerfully than it should so I recommend you keep on eye on yours, and aim to cook it for around 40 minutes.

You should be able to stick a knife into the loaf and no batter should stick to it (melted chocolate, yes, but not batter).

I did the calculations and if you cut this loaf into 10 slices, it’s about 155 calories a slice. 🙂 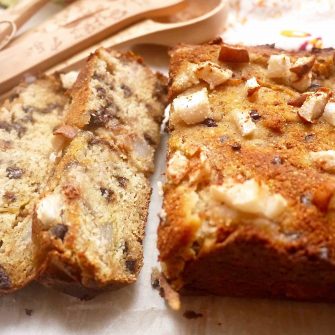