One of my go-to nutritious comfort foods are these Healthy Family Style Stuffed Peppers and Tomatoes.

I mean, there really isn’t anything quite like roasted… almost caramelized, peppers and tomatoes stuffed with a homemade Italian style meat sauce.

And while this might sound like it is complicated, this naturally Paleo, Whole30 compliant, gluten-free meal surprisingly isn’t hard to make at all!

Sure there is some prep-work but you can work on several of the steps at the same time and then once they are in the oven…. all you need to do it wait.

And these juicy, flavorful stuffed peppers and tomatoes will be ready to be devoured!

To start, you will need 6 large bell peppers and 4 large beefsteak tomatoes.

(Or 6 beefsteak tomatoes and 4 bell peppers, depending on what you want more of)

Then, you need to cut the tops off of the tomatoes and peppers.

First, hollow out the peppers, put the tops back on the peppers, and bake them for 20 minutes at 400 degrees.

Then, while the peppers are cooking, cut the tops off of the tomatoes, hollow them out and keep the inside of the tomatoes (to put into the meat sauce).

While the peppers are still cooking, make the meat sauce!

Cook a little onion, garlic, and red pepper flakes in some olive oil. Add sun-dried tomatoes, ground turkey, ground beef, and spices to the pan and cook until the meet is browned.

Add the inside of the tomatoes that you hollowed out, tomato paste and some extra strained tomatoes and cook for 10 minutes.

Fill the pan with the peppers and tomatoes (without their tops on). Then, fill each pepper and tomato with meat sauce, until it is full.

Cover each one with it’s respective top and surround the peppers and tomatoes with the remaining meat sauce.

Bake for about 45 minutes, until the peppers and tomatoes are soft… and oh, so beautiful!

And the result is an absolutely gourmet, melt-in your mouth, comfort food of all comfort foods, healthy dish.

These Healthy Family Style Stuffed Peppers and Tomatoes pair well with so many sides– basically any roasted veggie, or zoodle… or even rice or pasta.

They also taste great on their own.

I personally love adding a little bit of honey or coconut sugar to mine, and a bit of extra salt. The sweet-salty flavor with these stuffed peppers and tomatoes are BOMB.

Another great thing about this Healthy Family Style Stuffed Peppers and Tomatoes recipe is that feeds a lot of people. Or makes wonderful leftovers.

I had leftovers for days and looked forward to my lunch every single day!

Plus, it’s the kind of dish that pleases everyone.

I don’t know about you, but in my house, some people are die hard “stuffed pepper people” and others “stuffed tomato people”.

Both are delicious in my book. 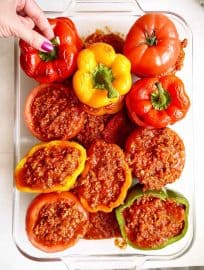